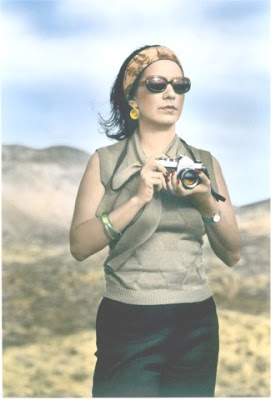 On Friday, September 14th after work I headed on down to the Chelsea Barnes & Noble for an artist meet & greet/book launch of The Moving Images of Tracey Moffatt by Catherine Summerhayes. Both Tracy and Catherine were on hand to discuss the book – a monograph and survey of Moffatt’s film and photography, characterized as Summerhayes put it by “that feeling of anticipation, that anything is possible…”

Moffatt is gorgeous woman in her 40s whose features seem to be a mixture of Australia’s indigenous and European cultures. This was her first book launch in New York City and she was visibly nervous, yet I also got the feeling that her frenetic energy was just a relevation of her own personality. She responded to the audience’s questions with quirky and quick-witted answers.

Originally trained in college as a photographer, Moffatt boasted that she “didn’t plan on being an artist” and “always wanted to be Roman Polanski.” She and her schoolmates didn’t do much work and just sat around the Brisbane coffeeshops waxing poetic about filmakers like Fellini. Since then, Moffatt has made a living off of her photography and film work that she described as being mostly autobiographical.

Moffatt’s “Love” video is currently on view at the Brookly Museum’s “Global Feminisms” exhibit. The video itself is a montage of scenes from famous movies – cut into 2 parts: the first half shows footage of women being slapped/hit by their male counterparts while the second half delivers the payback with women shooting/crushing their male oppressors. As Summerhayes put it, the video is quite violent due mostly to its quick editing – each scene a back-to-back, rapid-fire burst of hurt and anger that makes your blood boil.

Currently Moffatt is working on a new film with a “revolution” theme for the upcoming Sidney Biennale. Typically her work focuses on complex subjects like sexuality, history, identity, representation and race. Though it seems to me that Moffatt isn’t trying to convey any specific judgement (good or bad) on any of these themes – she’s just portraying the truth of her life and her environment. At the end of the book launch she said she’s been working on a film script for over 10 years – but if all her work is autobiographical, will she ever be able to finish it?

View some of Tracey Moffatt’s work online or go buy her book!

Photo: self portrait by Tracey Moffatt

Are you a photographer looking for feedback on your work? Come and join our  critique group hosted very month on Zoom. UPDATED: October 13, … END_OF_DOCUMENT_TOKEN_TO_BE_REPLACED

On his website, the photographer describes this current series as "color portraits of Mexicans from across the country and the social … END_OF_DOCUMENT_TOKEN_TO_BE_REPLACED

Amazing photo documentary featuring portraits of a group of animal wranglers in Nigeria. Read more about the project and see the entire collection on … END_OF_DOCUMENT_TOKEN_TO_BE_REPLACED

Prentice Herman "P.H." Polk (1898-1985) is not a name you'd hear in a typical Photo History class or lecture but I consider him to be a photography … END_OF_DOCUMENT_TOKEN_TO_BE_REPLACED

April 6, 2008–September 1, 2008 | Art of the AmericasPhantom Sightings: Art after the Chicano Movement is the largest exhibition of cutting-edge … END_OF_DOCUMENT_TOKEN_TO_BE_REPLACED

You won't find any fine art quality photos in Barack Obama's Flick Photostream but I'm posting it because: 1. I love that Obama and his campaign … END_OF_DOCUMENT_TOKEN_TO_BE_REPLACED

The first time I came across Lyle Ashton Harris' work was as an intern at the Jack Tilton Gallery in Soho, NYC back in the '90s. One of the exhibits … END_OF_DOCUMENT_TOKEN_TO_BE_REPLACED

In his latest solo show, The Promise of Light, artist Rico Gatson pays visual tribute to a decades-long history of Black migration from the south to … END_OF_DOCUMENT_TOKEN_TO_BE_REPLACED

January 25 - March 30, 2008This exhibition, comprised of 73 images selected by Parks himself, represents the greatest achievements of his long and … END_OF_DOCUMENT_TOKEN_TO_BE_REPLACED