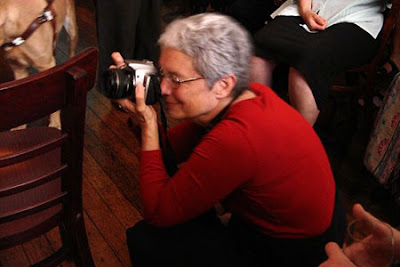 Books by this photographer:

1. In Her Hands: Craftswomen Changing the World
All over the world, women in developing economies improve the lives of their families by creating and selling exquisite, indigenous crafts. The Ndebele beaders of South Africa, the weavers of Guatemala, the flower painters of Poland, the dollmakers of Turkey, the mirror embroiderers of India, the batik artists of Indonesia contribute to the future of their cultures.

In Her Hands: Craftswomen Changing the World is a beautifully photographed documentary of ninety women in twelve countries on four continents, revealing their diverse lives and surprisingly universal aspirations. Often driven by the harsh realities of poverty, little education, and even a lack of basic health care, female artisans are motivated by the desire to provide for their children: to dress them properly, to feed them well, and, most of all, to educate them. The need for social contact and a sense of community brings craftswomen together into small groups, which in turn gives rise to new micro-enterprises in developing countries. Many political and social organizations, including the United Nations, provide guidance and economic support, most often in the form of very small, short-term loans; thus cooperatives are created that strengthen and enrich their cultural heritage as well as individual lives and fortunes.

Authors Paola Gianturco and Toby Tuttle have spent five years photographing, interviewing, and writing about craftswomen for this amazing collection. The artisans’ individual voices are featured throughout the book as the authors describe their encounters with the craftswomen; amusing, affecting journal entries relate the authors’ own experiences and reflections. In Her Hands celebrates a different kind of women¹s movement sisters, grandmothers, and friends join together to create beautiful crafts that contribute to a better life for themselves, their families, and for future generations.

2. Celebrating Women
Twenty-five thousand Swazi virgins dance for the Queen Mother. People who have had near-death experiences in Spain ride in open coffins and thank Santa Marta for their lives. Half-a-million Bolivians pray to Mother Earth and the Virgin Mary for cell phones, sewing machines, televisions, and Tudor houses. Polish girls float wreaths of wildflowers on the river. Berber divorcées invite Moroccan shepherds to marry them. In Thailand, an entire city honors the women who saved their ancestors from invaders. Couples from across the world race over obstacles in Finland’s World Wife Carrying Championships. In China, seafaring families ride in boats as a tribute to the Goddess of the Fishermen. And in the United States, women represent each of the fifty states in a competition for the famed title, Miss America.

In Celebrating Women, photographer Paola Gianturco trains her eye on the world’s most vibrant festivals that honor women as goddesses, warriors, lovers, healers, and athletes, among many other roles. These moving celebrations, idiosyncratic to their indigenous roots, take the form of parades, parties, competitions, and religious ceremonies. Gianturco spent five years photographing seventeen festivals in fifteen countries across five continents.

Collected for the first time ever in a single edition, Gianturco provides insightful text describing the specific occasions and detailing their historic and cultural significance, culled from her extensive interviews with musicians, dancers, vendors, mask makers, costume designers, journalists, priests, governors, and spectators-not to mention a bona fide princess and king. Exhibition to appear at One Market, Concourse Lobby, San Francisco, October 4-December 17, 2004. This is the first exhibition to be curated by the International Museum of Women, San Francisco. Author tour across the United States, October-November 2004

Photographer Paola Gianturco and writer David Hill offer inspirational profiles of a people who have endured and, indeed, gained strength, thanks to the bounty of their land, their beliefs, traditions, and kinship with one another. People like Luis.

Luis was orphaned as a small child. The aunt and uncle who took him in sent him into the streets to hawk trinkets and cadge pesos from tourists. He quickly figured out that he could do better if he learned the tourists’ language, so he taught himself English. At 18, he became a licensed tour guide. Five years later, he was begging again, a homeless panhandler, brought low by demon rum. Then he found AA, which helped him get sober and gave him a reason to live. He traveled his country, launching AA programs. Today, he’s a doting grandfather and popular tour guide. Luis’ story is but one of many Gianturco and Hill have discovered in their travels through Guatemala. Readers of their book will enjoy—and be inspired by—many more.

4. Women Who Light the Dark
Across the world, local women are helping one another tackle problems that darken their lives. These women lack material resources, but they possess a wealth of a more precious resource: imagination. Imaginations that light the dark. Moroccan women create and produce plays that educate illiterate people about women’s rights. Girls in Zimbabwe compose and perform poems that move communities to fight child rape. In Vietnam, counselors heal survivors of domestic violence with line dancing, art, and games. Brazilian math teachers inspire girls from the favelas to learn math by originating fashion shows.

Sometimes imagination takes the form of innovative strategies. In Nicaragua, women become welders, carpenters and electricians—all supposedly men’s jobs. In Kenya, mothers get wells dug at schools so their daughters can bring water home from class rather than walking seven hours to fetch it. In the US, activists introduce women with disabilities to ropes courses, camping, whitewater rafting, and swimming, empowering them to lead.

Travel with photojournalist Paola Gianturco: climb Annapurna; eat lunch while soldiers carry sandbags to the roof; watch a traditional healer at work; attend a Muslim reception with ambassadors, rabbis, bishops, and cabinet ministers; witness a ceremony that welcomes indigenous babies to the world.

Are you a photographer looking for feedback on your work? Come and join our  critique group hosted very month on Zoom. UPDATED: October 13, … END_OF_DOCUMENT_TOKEN_TO_BE_REPLACED

I Was Cuba: Treasures from the Ramiro Fernandez Collection by Kevin KwanCuba, an island just 90 miles south of Florida, has been and will be one to … END_OF_DOCUMENT_TOKEN_TO_BE_REPLACED

On Friday, September 14th after work I headed on down to the Chelsea Barnes & Noble for an artist meet & greet/book launch of The Moving Images of … END_OF_DOCUMENT_TOKEN_TO_BE_REPLACED

Maurice Henri is a photographer whose exhibit on photographs of village life in South Africa has received critical and popular acclaim. Maurice Henri, … END_OF_DOCUMENT_TOKEN_TO_BE_REPLACED

Excerpt from article by Reed Johnson, Los Angeles Times Staff Writer:"TO all the people who think that the illegal immigration debate is about … END_OF_DOCUMENT_TOKEN_TO_BE_REPLACED

Books by this photographer: 1. In Her Hands: Craftswomen Changing the WorldAll over the world, women in developing economies improve the lives of … END_OF_DOCUMENT_TOKEN_TO_BE_REPLACED

These photos are long overdue... my 4-day trip to TT back in March 2007 was so relaxing, inspiring, yummy (i love doubles!) and enlightening. Most of … END_OF_DOCUMENT_TOKEN_TO_BE_REPLACED

In my opinion, Senator Barack Obama is the voice of TRUTH in this presidential election campaign. Yes, OK, he should be talking about the state of the … END_OF_DOCUMENT_TOKEN_TO_BE_REPLACED