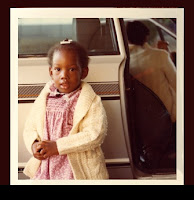 It’s rare that the Black experience in Latin American culture is acknowledged, let a lone documented via photography. In her series African by Legacy, Mexican by Birth, photographer Ayana V Jackson’s commitment to showing this part of the African Diaspora that has been shoved under the rug, is what drew me to her work. Ayana’s work is opinionated and steeped in the scars left from colonial history without being didactic. Read on to learn more about her journey to becoming a working fine art photographer and her recent experience at Paris Photo 2011.

D&B: Where are you from?
AVJ: I was born in New Jersey, USA however I live between Johannesburg and New York.

D&B: What kind of photography do you shoot and how did you get started – any “formal” training?
AVJ: My practice is quite diverse. I began with reportage/documentary in 2001 with projects centered around Contemporary Africa and African Diaspora identity. Via portraiture I created several bodies of work aimed at exposing the complexity of black identity worldwide. From hip hop artists in West Africa to African descendents in Latin America I sought to uncover narratives that are rarely associated with people in the regions I worked in.

Recently I began creating self portraits. This transition marked the beginning of my studio practice. “Leapfrog (a bit of the other) Grand Matron Army” was the first of that series. In it I present my body in the form of 9 female archetypes from the precolonial to afrochic. The reason for this shift was that I wanted to have a more specific conversation with my work. Maintaining my body as a constant allows my audience to consider my concept and intentionality rather than examine my portraiture via an ethnographic point of view.

Regarding “formal” training: it is limited to an introductory class during undergrad and a more concentrated study during summer term under Katharina Sieverding at the Universitat der Kunst in Berlin. The latter was quite formative as it was during that time that I learned large format analogue printing and began to study photographic theory.

D&B: What cameras or techniques do you use?
AVJ: I use a YashikaMAT 124G and a Canon 5D.

D&B: Who are your mentors (in photography)?
AVJ: Katherina Sieverding, Deborah Willis, Jamel Shabazz, Andrew Tshabangu, Santu Mofokeng and Tracey Rose are photographers I speak (or have spoken) most to about my work. They have each come into my life and influenced my practice at varying times. Most recently I have been pulling from my time with Katharina.

D&B: Have you experienced any setbacks or different treatment along your photography career that you would attribute to being a woman or photographer of color? (this question is optional)
AVJ: No…  I recognize the socio-historic complexities of race and gender in our industry, but I refuse to allow either to be a handicap because if I did I would suffer from paralysis. I have two mottos, “you can only climb as high as you reach” and “there is more than one way to skin a cat”.

So far they have kept me going.

D&B: When did you realize you could have a career in photography? Describe your journey towards becoming a working photographer.
AVJ: Photography came to me in a round about way. My father was a photo enthusiast, so I have early memories of learning to see the world through a lens. Later, after receiving my undergraduate degree in sociology, I decided I wanted to use the visual rather than academic language to express my research findings. This decision had to do with my desire to reach a broader audience.

Photography has so many avenues for output… this really appealed to me as my work carries an activism within it.

While it is true that in 2002 my series Full Circle: A Survey of Hip Hop in Ghana caught the eye of Melissa Levine (then curator of the World Bank Art program) who exhibited it in the World Bank headquarters, I can’t say that at the onset I intended to enter the “fine art” field. I was quite content in the photo-journalistic and documentary fields.

African by Legacy, Mexican by Birth (a work I did in collaboration with writer Marco Villalobos) was an extension of my undergraduate studies on Afro-Latino culture. It began as an independent project that was picked up by the Caribbean Cultural Center/African Diaspora Institute and the Margerite Casey Foundation. With this support the work traveled to museums and galleries throughout the US.

It was at this point that I began to catch the eye of the greater art community and started to settle into my career in photography. Since then I have worked with multiple traditional and non traditional art organizations worldwide.

My move to South Africa and collaboration with Gallery MOMO marked the most recent stage in my career. By moving my practice to Johannesburg, I began to engage with their quite vibrant photographic community. South Africa is one of the most important pillars of photography global (in my opinion). Working within that constellation has launched my work incredibly as did my inclusion in the 2009 Bamako African Photography Biennial. The latter resulted in my being granted a residency at the Cite des Arts in 2010 which was the site for the creation of Leapfrog and hence my movement into self portraiture.

D&B: What do you hope to achieve with your photography?
AVJ: As I mentioned earlier, there is an activism to my work. I’d say my main concerns are three tiered:

D&B: What’s your dream photography project?
AVJ: I can’t say. My dream is to be able to keep working. My practice is about problem solving. I generally find myself fixated on something and the only way I can get past it is by creating work. I rarely (if ever) take commissions.

My projects find their seed in some issue I feel needs to be addressed and I spend my time finding the right language or formula for encapsolating and/or addressing it. I only pray that I will have the means and the freedom to continue in this vein.

My current series Povporn has to do with this. Recently I began to ask myself why there is so much activism in my work. What exactly am I spending so much time fighting against? It is a legitimate question because sometimes we loose the plot.

In doing so I remembered that this all started with National Geographic. My entire view of people who look like me came down to “primitivism”. And second to that were cycles of death, disaster, disease, and destruction. Most (if not all) all of the imagery I was exposed to (related to black skin) was centered around these things. Yet I knew from personal experience that there was a much greater picture. Something was happening outside the frame.

Anyway, Povporn is my attempt at asking my audience to examine the seductive nature of images of suffering… and particularly the suffering black/impoverished body. We are quite comfortable with this kind of imagery. In fact, careers are spawned by one’s ability to capture these kind of images. However it is dishonest, one sided, and unfair. I know this because I regularly have to wade through the assumptions created by this imagery.

So understanding the power of visual communication would be one of my greatest life lessons.

I had never been present when my work was shown at a fair, so sitting at the booth was such a crazy experience. Hundreds of people passing by the minute. Watching who stopped… evesdropping on their interpretation of my work. Watching the cycles of emotion some spectators would go through. It was fascinating!

There is a distance between my intentionality and the spectator’s interpretation. This is a fact and I had to come to terms with this during the fair, but at the same time lots of people “got it” and this made an impression.

That aside, I’d say this year’s theme was funny. You hear among my peers in the corridor that Africa is a fiction. What is Africa, who is African, how many versions of African identity exist. So walking around the fair and experiencing the disparate versions of African photography was interesting.

But to answer your question, I discovered the work of James Barnor. That was a great find.

Are you a photographer looking for feedback on your work? Come and join our  critique group hosted very month on Zoom. UPDATED: October 13, … END_OF_DOCUMENT_TOKEN_TO_BE_REPLACED

Deadline: January 26, 2008 Ultimate Eye Foundation will present two grants for $5,000 each: one for digital photography using both a camera and a … END_OF_DOCUMENT_TOKEN_TO_BE_REPLACED

Sebastiao Salgado, 64, is probably the best-known Brazilian photographer (and arguably the "world's most widely viewed") of our time. I just came … END_OF_DOCUMENT_TOKEN_TO_BE_REPLACED

"Blend Images is the world's leading multiethnic commercial stock agency."Nuff said. Go visit now. I especially urge those of you in the print world … END_OF_DOCUMENT_TOKEN_TO_BE_REPLACED

Her work is controversial, yet I LOVE the simplicity of her notorious use of the silhouette and the powerful subtlety of her message(s). Walker's … END_OF_DOCUMENT_TOKEN_TO_BE_REPLACED

I Was Cuba: Treasures from the Ramiro Fernandez Collection by Kevin KwanCuba, an island just 90 miles south of Florida, has been and will be one to … END_OF_DOCUMENT_TOKEN_TO_BE_REPLACED

Now through May 31, 2008. CONTACT is an annual month long festival of photography with over 500 local, national and international artists at more than … END_OF_DOCUMENT_TOKEN_TO_BE_REPLACED