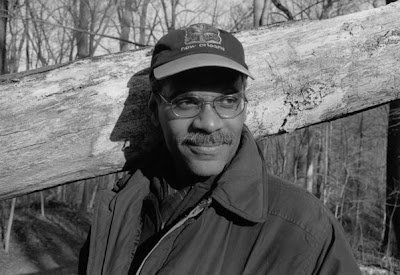 You can view some photos on Gerald Cyrus’ En Foco profile page and also see his work in the Connections group show at the Jenkins Johnson gallery ending March 28, 2009.

D&B: Where are you from?
GC: I was born in Los Angeles, CA and raised in the Leimert Park area of the city.

D&B: How did you get started in photography – any “formal” training?
GC: I had a camera in college that I fooled around with until it was stolen. I received another camera in my mid-twenties as a gift and decided I wanted to actually learn something about the medium. I started off with a night course at a local high school, and then moved on to some extension courses at colleges and art schools in L.A. before finally moving to New York to pursue an MFA at the School of Visual Arts.

D&B: What cameras or techniques do you use?
GC: I have a variety of cameras from 35mm on up to 4×5, as well a little digital camera I carry around a lot. At the moment, I’d say I’m using a medium-format Plaubel 6x7cm camera most of the time and praying it doesn’t break down on me. I still use black-and-white film for most of my personal work, and I process and print all my work in my darkroom.

D&B: Who are your mentors (in photography)?
GC: Well, there have been photographers whose work has been influential on me, such as Roy DeCarava, Robert Frank, Danny Lyon, Josef Koudelka, Gilles Peress, Lee Friedlander and many others.

And there are those whom I’ve been fortunate enough to have a personal connection with and whom I consider mentors, including my fellow photographers in the Kamoinge collective such as Beuford Smith, Tony Barboza, Frank Stewart, Danny Dawson and Adger Cowans. Also, Donald Bernard, Roland Charles, Sheila Pinkel, Willie Middlebrook, Jules Allen, and Deborah Willis have provided inspiration and guidance.

[Dodge & Burn Editor’s Note: The Kamoinge Collective is an African-American photographers’ organization that formed in 1963 to address the under-representation of black photographers in the art world. Kamoinge is a Kikuyu word in East Africa that means “a group of people working together”.]

D&B: Have you experienced any setbacks or different treatment along your photography career that you would attribute to being a photographer of color? (this question is optional)
GC: This would be hard for me to pinpoint on a personal basis, however, I do think that the overall receptiveness toward work that falls out of the accepted norms of the museum world is lukewarm at best. There are other cultural ways of approaching art that should be represented more. It’s as if you turned on the radio and all you heard was country and western music. There needs to be a lot more blues, more jazz, more salsa out there.

D&B: When did you realize you could make money as a photographer? Describe your journey towards becoming a working photographer.
GC: Well, there’s making money and there’s making a living. Though I make some money from my photography, I certainly wouldn’t say I’m making a living from it. Fortunately, I’ve been able to do some teaching and receive some grants to make up the difference (as well as be married to a gainfully employed spouse).

D&B: What do you hope to achieve with your photography?
GC: Hopefully I can leave behind some work (perhaps in book form) that will move people and inform them about some aspect of being an American at this point in time.

D&B: What’s your dream photography project?
GC: Being paid a living wage to photograph whatever interests me at the moment. Yes, it is a dream.

D&B: What are you shooting now?
GC: Primarily some form of street photography (sometimes candid, sometimes portraits, sometimes social landscapes). I have some ideas as to how to tie them all together, but they’re still in the formative stage right now.

Are you a photographer looking for feedback on your work? Come and join our  critique group hosted very month on Zoom. UPDATED: October 13, … END_OF_DOCUMENT_TOKEN_TO_BE_REPLACED

Cover for Only Skin Deep, edited by Coco Fusco and Brian WallisThis is my first Summer off since graduating college 13 years ago! It's been nice … END_OF_DOCUMENT_TOKEN_TO_BE_REPLACED

Some heads might roll at Vogue :) Excerpt from WWD.com's coverage:"...a spokesman for Vogue said: "The Shape Issue celebrates athleticism from start … END_OF_DOCUMENT_TOKEN_TO_BE_REPLACED

Here's a story and photography book that explores the search for identity. Many of us and those before us have experienced identity lost because of … END_OF_DOCUMENT_TOKEN_TO_BE_REPLACED

A new photography exhibit at the California African American Museum. Read a review of the exhibit and see some of the photos on display in this L.A. … END_OF_DOCUMENT_TOKEN_TO_BE_REPLACED

"Blend Images is the world's leading multiethnic commercial stock agency."Nuff said. Go visit now. I especially urge those of you in the print world … END_OF_DOCUMENT_TOKEN_TO_BE_REPLACED

I HIGHLY RECOMMEND you go see... Lorna Simspon on view now thru May 6, 2007 at The Whitney Museum of American Art.Here's a description of the exhibit … END_OF_DOCUMENT_TOKEN_TO_BE_REPLACED

Held over 4 days during the summer in Gallup, New Mexico, every year this ceremonial features: dances, a Queen contest, all-Indian invitational rodeo, … END_OF_DOCUMENT_TOKEN_TO_BE_REPLACED

These photos are long overdue... my 4-day trip to TT back in March 2007 was so relaxing, inspiring, yummy (i love doubles!) and enlightening. Most of … END_OF_DOCUMENT_TOKEN_TO_BE_REPLACED

This project consists of a series of 16 color portraits of people of mixed ethnic origin in front of primary color backgrounds. The images challenge … END_OF_DOCUMENT_TOKEN_TO_BE_REPLACED