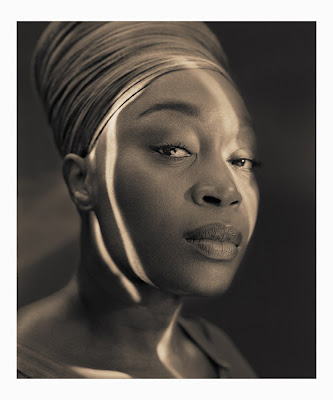 The National Portrait Gallery is pleased to announce its participation in the UNDEREXPOSED arts program, part of the 4 The Record Initiative (4TR) created to highlight talent and achievement within the black British community and to bring their work to a wider audience. The main hall of the Ondaatje Wing will host a plasma screen installation, displaying dramatic portraits of thirty black British actors by photographer Franklyn Rodgers, while the wider programme will see UNDEREXPOSED events taking place at multiple sites across London from the beginning of April.

Franklyn Rodgers sits at the cutting edge of contemporary photographic portraiture, bringing a unique approach and a style that is distinctly his own. He has created a diverse body of work over the last decade, spanning the arts, music, and corporate genres and including work for Polydor and National Geographic. As a recent recipient of the prestigious NESTA fellowship award, he has been able to further expand his endeavours, exploring cross-cultural identities on a global platform.

The 4 The Record Initiative was founded by actor Fraser James as a personal response to the national media debate which suggests that the absence of black role models for young people in the black British community is one reason for the rise in violence, gang culture and low achievement amongst young black adults. Drawing upon the wealth of talented black men and women in the British acting profession, Fraser James conceived of the UNDEREXPOSED programme as both a celebration of this talent and a means of inspiring young people looking for direction and guidance.

Fraser James comments: ‘UNDEREXPOSED is the culmination of a long held belief of mine that there are many potential black role models, but their visibility needs to be higher. I hope this project goes some way in achieving a greater level of recognition for the wealth of talent we have in the acting profession and to inspiring the next generation of black actors in this country.’

UNDERPEXPOSED is the first in a series of projects which will take place every two years, focusing on black British talent in different areas. It has been made possible thanks to the support of Arts Council England and deciBel.

In addition to the plasma screen installation at the National Portrait Gallery from 4 April 2008, the UNDEREXPOSED programme will include a poster campaign on the London Underground provided by the Mayor of London during April and a two site installation at Peckham High Street & Commercial Way from 2 April.

Are you a photographer looking for feedback on your work? Come and join our  critique group hosted very month on Zoom. UPDATED: October 13, … END_OF_DOCUMENT_TOKEN_TO_BE_REPLACED

Excerpt from A Gathering of the Tribes interview by Dread Scott: One thing I was very interested in as a young artist when I first saw your work was … END_OF_DOCUMENT_TOKEN_TO_BE_REPLACED

Produced by the National Film Board of Canada, 1967These films reveal the live reality of traditional Eskimo life before the European … END_OF_DOCUMENT_TOKEN_TO_BE_REPLACED

New York City, December 10-14, 2008Featuring a photographic gallery opening and exhibition, from among the world's greatest international artists and … END_OF_DOCUMENT_TOKEN_TO_BE_REPLACED

One of my many missions right now is to compile a list of photo books by African-American photographers. Honestly, I'm finding this mission to be … END_OF_DOCUMENT_TOKEN_TO_BE_REPLACED

Her Word As Witness: Women Writers of the African Diaspora

Come join photographer Laylah Amatullah Barrayn for this artist talk/panel discussion in conjunction with her photography exhibition, Her Word As … END_OF_DOCUMENT_TOKEN_TO_BE_REPLACED

The Millennial Generation’s Revolution Will Not Be Televised

Just thought I'd share an xcerpt from the Monday, February 18th posting titled "No Country for Old Men" in the Major Conflict blog:"The authors of the … END_OF_DOCUMENT_TOKEN_TO_BE_REPLACED

Another one of those posts that has nothing to do with photography per se, but it is a story that counters the negative and perverse nature of hip-hop … END_OF_DOCUMENT_TOKEN_TO_BE_REPLACED

Show features 'Photographs and the Revolutionary Art of Emory Douglass'Excerpt from The California Aggie article by Sonia Parecadan:"Often painted as … END_OF_DOCUMENT_TOKEN_TO_BE_REPLACED

Great posting from the "We Need to Stop" blog on this photo for sale on eBay.Read it here. … END_OF_DOCUMENT_TOKEN_TO_BE_REPLACED