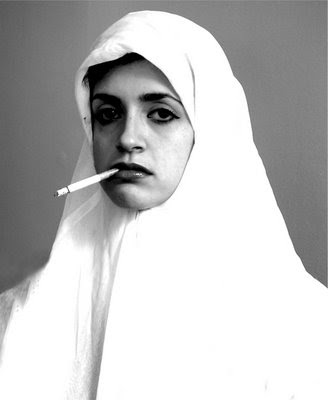 It’s amazing how the female body can incite both pleasure/desire/love AND pain/repulsion/hate.

The work of multimedia artist Sarah Maple, a 23-year-old London native of Kenyan and British heritage has recently been the subject of attacks and much controversy. Her paintings on display at the Salon Gallery in West London have invited angry, anonymous phone calls as well as physical damage to the gallery.

As a female who was raised Muslim in a bi-cultural household, Maple consistently addresses issues of identity in her work. She still considers herself a practicing Muslim and has “upset the Islamic world before. An exhibition by her earlier this year showed Muslim women in provocative poses, including one suggestively sucking on a banana. She won the Saatchi Prize last year for her self-portraits, some of which showed her in a headscarf smoking a cigarette [shown here].”

Maple defends her work by stating that it’s “really personal, about my background with my father being British and my mother who is a Muslim and how I felt growing up. I was exploring the question of fusing those two together and whether it could be done.”

There’s certainly no reason to inflict property damage over art in a country that protects an individual’s right to freedom of expression, but is Maple just being controversial for the sake of publicity?

Growing up bi-cultural myself, I know there are conflicted feelings that stir within – all of which are great catalysts for making art. Regardless, expressing oneself is always a political statement and it seems Maple’s timing couldn’t be better given the current state of Muslim-Western relations.

Are you a photographer looking for feedback on your work? Come and join our  critique group hosted very month on Zoom. UPDATED: October 13, … END_OF_DOCUMENT_TOKEN_TO_BE_REPLACED

Graciela Iturbide, internationally recognized for her iconic images of Mexico, was named the 2008 winner of the prestigious Hasselblad Foundation … END_OF_DOCUMENT_TOKEN_TO_BE_REPLACED

How bad a** is this? A Mom and Son photography legacy! This is the stuff African American families are made of, but you would never see it on TV. Dr. … END_OF_DOCUMENT_TOKEN_TO_BE_REPLACED

Due to recent comments that got out of control, I am posting these rules. Please read and adhere to them when commenting and if you don't like the … END_OF_DOCUMENT_TOKEN_TO_BE_REPLACED

17 May - 14 June 2008Now in it's 18th year, the Hereford Photography Festival is the UK's longest running annual celebration of the photographic … END_OF_DOCUMENT_TOKEN_TO_BE_REPLACED

Check out this video interview with singer songwriter Santigold and artist Wangechi Mutu. Both women discuss their video collaboration titled, The End … END_OF_DOCUMENT_TOKEN_TO_BE_REPLACED

Panel Discussion and Screening of Film on Colorism Among Latinos