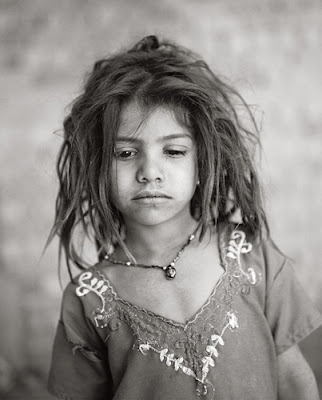 “While working on the book Moksha, Sheikh went to Vrindavan, one of India’s holy cities, where Hindu widows come to live out their last years. It was while listening to their stories that he began to comprehend the full extent to which women in India are the victims of religious and cultural codes that reduce many of them to little more than child-rearing servants. He returned to India to find out more from young women growing up in a society that, whatever economic advances it may boast, is still widely prejudiced against them. Ladli—which in Hindi means ‘beloved daughter’—is the result.

The stories told here will come as a shock to many: the abortion of thousands of healthy fetuses every year because of their gender, the murder at birth of baby girls, the abduction and rape of adolescents forced into prostitution, the exploitation of child labor, the physical abuse of domestic workers and, worst of all, the murder of young women whose dowries, or performance as wives, does not match their husbands’, or their husbands’ families’, expectations.

Through a network of street-level activists, Sheikh builds up a picture of India that undermines its new role as a modern democracy. His portraits have a directness and articulacy that painfully reinforce the stories they tell. Some of the strongest voices in this book belong to older women, who have overcome personal tragedies and are determined to fight so that other women might avoid them.

What does it say about a country that it mistreats its women? It is not for lack of legislation that women continue to be abused in India, but because the police, the judiciary and the government fail to enforce the laws made to protect them. How can such an ingrained system be reformed? To answer that, we need to understand more about its victims, and in this Fazal Sheikh is a reliable guide.”

Are you a photographer looking for feedback on your work? Come and join our  critique group hosted very month on Zoom. UPDATED: October 13, … END_OF_DOCUMENT_TOKEN_TO_BE_REPLACED

Graciela Iturbide, internationally recognized for her iconic images of Mexico, was named the 2008 winner of the prestigious Hasselblad Foundation … END_OF_DOCUMENT_TOKEN_TO_BE_REPLACED

Pioneer African-American photographer James Van Der Zee made a name for himself capturing the people and life on 125th street in Harlem, NYC where in … END_OF_DOCUMENT_TOKEN_TO_BE_REPLACED

We've all heard about iconic Black photographers like Gordon Parks and James VanDerZee, but today I found out about the "founder of African-American … END_OF_DOCUMENT_TOKEN_TO_BE_REPLACED

January 25 - March 30, 2008This exhibition, comprised of 73 images selected by Parks himself, represents the greatest achievements of his long and … END_OF_DOCUMENT_TOKEN_TO_BE_REPLACED

By TERRY KINNEY Associated Press WriterA rare daguerreotype of abolitionist John Brown was bought by an unidentified bidder by telephone for $97,750 … END_OF_DOCUMENT_TOKEN_TO_BE_REPLACED

Documentary photography by Anna KåriBeautiful and inspiring work I found on the Documentography website. Documentography is a collective of … END_OF_DOCUMENT_TOKEN_TO_BE_REPLACED

New Power Generation 2008, organized by the Hampton University Museum, is a national competition for contemporary art by people of African descent. It … END_OF_DOCUMENT_TOKEN_TO_BE_REPLACED