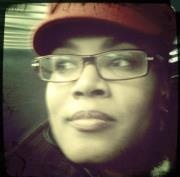 You can view some photos on Felicia Megginson´s EnFoco profile and also see her work in the Connections group show at the Jenkins Johnson gallery.

Where are you from? I was born in Los Angeles, but was raised on the East Coast, primarily in Virginia.

How did you get started in photography – any “formal” training?
My introduction to photography began informally when my parents gave me an Insta-matic camera when I was six or seven and I was quite the shutterbug. I got more formal training in high school, when I had an awesome one semester class in my senior year that introduced me to the darkroom, pinhole photography and the magic of printing. I completed an M.A. in Studio art at NYU, where my concentration was in photographic studies.

What cameras or techniques do you use? I’m still pretty much an analog kind of girl. My trusty camera for the past 20 years has been a Nikon 8008S, with a 28mm lens. That’s my got to for all my 35mm work. I love that camera and would only trade it for a Leica. Most of the work I made over the past eight years has been shot on a vintage Polaroid Land Camera.

Polaroid used to make cameras with real lenses and shutters, and –until they stopped making the film in 2007–I shot solely on 665 positive/negative black and white film. It gave me images with beautiful tonal range, and allowed me to enlarge the 3 1/4″ x 4 1/4″ negatives. I was pretty bitter when they ended all film production. I’ve recently started working with my Canon G10, but I’m still an analog girl in a digital world.

Who are your mentors (in photography)? Well one of my mentors from grad school was Peter Campus, he really influenced me in my last year of school, when he gave me some great guidance regarding process and not being so literal with my work. Even though he’s primarily known for his video work, he did some beautiful black and white portraits early on in his career.

Other indirect influences were Lorna Simpson and Albert Chong. I love the visual lexicon they have created and how it plays out in their work. I think Chong’s book Ancestral Dialogues had real influence on me early on particularly because he worked with the Type 55 Polaroid film.

I’d also say the work of the Magnum photographers like Sebastiao Selgado, and Cartier Bresson, or photo documentarians like Lee Friedlander and Roy De Carava influenced me. Through them, I think I learned about the difference between seeing and looking, if that makes any sense. I may not have had direct contact with them, but I was definitely influenced by their work.

Have you experienced any setbacks or different treatment along your photography career that you would attribute to being a woman and/or photographer of color? (this question is optional) With respect to setbacks and being an artist of color, I cannot necessarily say that I’ve missed out on opportunities, but sometimes I feel like the perceived space that I have to work in as a creative person is somewhat limited. There is this unspoken expectation that every piece I work on has to overtly be about my race. Maybe that is just my perception, but I feel that it’s not always necessary to have race or gender be at the center of my work. Because I am a woman who is black, it should be understood that these things influence how I see the world, but I don’t feel the need to position every piece I make in my blackness or my gender.

Some pieces, like the series called Sojourn, are more about this overall notion of being and belonging, about claiming ones identity, but I do not think the work is just about being black any more than I think it’s just about being a woman, but people will project that into the work. The disadvantage is feeling at times like I can’t just take a pretty picture, or make some abstraction without someone wanting to make it about the type of experience. It’s a tricky balance, one I often feel white artists do not have to grapple with.

When did you realize you could have a career in photography? Describe your journey towards becoming a working photographer.Well it’s been an on again off again realization. The fact is, it’s probably only been within the last five years or so that it’s felt like a possibility because I really didn’t enter grad school with that as a goal… at all. Residencies and participating in the Artist in the Market Program at the Bronx Museum really helped tremendously.

Residencies probably have been the biggest help for me. Having unlimited time to just make your work is a gift, especially since I have a “regular” job on top of maintaining the work. I still have to push myself to get out there, to get the work seen. Focusing on projects, networking… It’s not been an easy path for me because it’s one I stumbled upon more than anything.

What do you hope to achieve with your photography? Not really sure. On many levels I’m a compulsive picture taker. I’m not always sure what I’m hoping to capture or document until I’ve done it for quite a while. Mostly I suppose I’m trying to get a better understanding of the world, how people interact, and the easiest most accessible way for me is with my camera.

What’s your dream photography project? I think I would love to spend a year in Northeastern Brazil where the largest population of Afro-Brazilians live and try to get a sense of the people, the culture by just observing and photographing. Or I’d like to spend time in Iceland taking photos of the landscape. Because it’s a volcanic island, the people believe the land is a live, and I’m interested in investigating that notion.

What are you shooting now? I’m working on an ongoing series called SHIFT that examines the changing nature of neighborhoods that are in the throes of gentrification. I’m also working on a series of images about the solitary nature of travel, from daily commuting, to longer trips on trains, planes and buses. It’s my first all digital project.

Are you a photographer looking for feedback on your work? Come and join our  critique group hosted very month on Zoom. UPDATED: October 13, … END_OF_DOCUMENT_TOKEN_TO_BE_REPLACED

Photography Studio with Mary Giancoli: Round Trip Migrations from Mexico to New York

WILMINGTON, DE. - The Delaware Art Museum presents Frida Kahlo: Through the Lens of Nickolas Muray, an exhibition of nearly 50 photographs of Frida … END_OF_DOCUMENT_TOKEN_TO_BE_REPLACED

Priya Kambli's imagery struck me when I received an email about her solo show in the 2010 Fotofest Biennial. There's something so visually arresting … END_OF_DOCUMENT_TOKEN_TO_BE_REPLACED

Grand Valley State University1 Campus Dr.Allendale, MI 49401-9403The Department of Classics and the Office of Multicultural Affairs and African … END_OF_DOCUMENT_TOKEN_TO_BE_REPLACED

One of my many missions right now is to compile a list of photo books by African-American photographers. Honestly, I'm finding this mission to be … END_OF_DOCUMENT_TOKEN_TO_BE_REPLACED

How bad a** is this? A Mom and Son photography legacy! This is the stuff African American families are made of, but you would never see it on TV. Dr. … END_OF_DOCUMENT_TOKEN_TO_BE_REPLACED