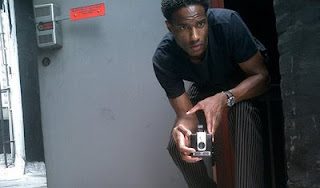 Photographer Eric J Henderson was referred to the Dodge & Burn blog via a long tailed search engine result. He then sent me a very endearing email. I was struck by the elegance of his photos, all taken with a vintage camera. Eric’s dedication to using a film is the sign of a photographer who’s true to the craft of the medium.

D&B: How did you get started in photography – any “formal” training?
EJH: I spotted my camera in November of 2003 while walking to the subway in Harlem. It’s a 1950 Kodak Brownie Hawkeye I bought for $5 from a homeless guy who used to set up shop at 125th and Park Avenue. I considered it just a beautiful art deco paperweight until two days later deciding to see if it worked.

I found different ways to make the film work and then my “training” started. I shot every day for two years straight and I can’t think of any two days going by since without having shot something. I had never shot before finding the camera.

D&B: What cameras or techniques do you use?
EJH: I use the Brownie camera exclusively, but not for any nostalgia. I mean, I dig the design and the 1950ness of it, but I’m intrigued by the idea of technology often advancing not because we’ve exhausted it, but rather because we simply want something new.

I want to find what’s in the infinity between the parameters of this particular technology. I shoot mostly at night in long exposures that I count off in my head. The camera has a flat bottom that is perfect for using the earth or street things as a tripod. I also compose in multiple exposures using any light I find, especially the crosswalk figure.

D&B: Who are your mentors (in photography)?
EJH: I had no interest in photography before finding the camera, so I don’t have a list of photography mentors yet. I have taught myself, but I also know that we all learn from somebody, if not directly in the discipline. So, there’s a varied list of people/places that make me think: The Studio Museum In Harlem and Thelma Golden (for intense curatorial ethic), J. Vernon McGee and Umberto Eco (for ways of thinking), Deborah and (son) Hank Willis (for their brands of black aesthetic), Arthur Ashe (for intelligent perseverance), Kristen Hayden of OneworldNow, the group that has sponsored my international work in conjunction with Starbucks (for how to will things into existence.)

And kids. I don’t mean that in the cute sense, but rather I look at them to learn how they solve problems with a fresh mind.

D&B: Have you experienced any setbacks or different treatment along your photography career that you would attribute to being a photographer of color? (this question is optional)
EJH: Our still racialized context would make “yes” a pretty safe bet, but I haven’t perceived it yet, positively or negatively. I’ve been on the grind enough not to feel any guilt or wasteful anger, whatever comes.

D&B: When did you realize you could make a living at photography? Describe your journey towards becoming a pro.
EJH: A few incidents have made me believe it’s possible. My first exhibit was a couple of 23″x23″ pieces in the group show “hrlm: pictures” at the Studio Museum in Harlem. The New Yorker Magazine noted them as standout images.

I also began to be published and commissioned to teach and shoot (Brazil, Morocco, NYC) and last year had my first solo exhibit and residency at The Forsyth Center Galleries (Texas A&M U). Most recently I consulted on a World Bank project for Gaza and the West Bank.

I’m glad to be on the journey. The first time I ever said, “I’m a photographer,” though, was to a policeman at 2am in Queens during my second year shooting. I knew that “I’m just taking pictures” wasn’t going to cut it and have since discovered that moving around the wee hours with a little black box and kneeling on the street will get you stopped a lot.

What do you hope to achieve with your photography?
I would love to have real conversation through my work, to have people stop and consider an idea that they find enduring.

I look to draw the animate out of the inanimate. I also want the work itself to engage people. I’ve shot Sean Combs, Madeline Albright, and Bill Clinton. They all said, “You can still shoot with that?!”… “Yes, now stand under this light and be very still, please.”

What starts as a curiosity usually leads to real conversations on art and life with people from all over the world.

D&B: What’s your dream photography project?
EJH: It’s 100 Brownie cameras in the hands of young and old, together in the beautiful nighttime hunt, shooting from 12am to dawn, moving as a cloud through a city. Later, we’ll host a big show, opening at 12am.

D&B: What are you shooting now?
EJH: I’m still exploring cities and the night but now adding outdoor portraits to the mix, though still in nighttime long exposure. People who know you should say, “That looks like you,” but not be quite sure.

I’m also interested in a Black aesthetic, but not necessarily via documentary photography. Of course, documentary is art, too. But, most black photographers I’ve read about are known for documentary. I’m a real fan of that as it speaks to the power and appeal of our historical cultural experience.

However, I imagine that they shot more than that, a flower or something else once in a while. If art has such transcending power it is now interesting to me to expect that a necessarily different perspective will come through even without black people or icons always present. Sorta post-black in order to see more dimensions of black.

For example, Brazil and Morocco still came through clearly when I asked the kids to use the Brownie camera to find something interesting or beautiful. I didn’t want another “hard life in the favela” shot. There is a place for that, but, having lived in neighborhoods in which tourists sneak images of the residents’ culture or conditions, I would feel the same kind of voyeur to ask them yet again to shoot their lives versus shooting their imaginations.

The Moroccan kids were wowed to see their work at Villa des Arts Contemporary Art Museum (Rabat) and in the Seattle Art Museum. The photos were good – and you have to work for that. So, I challenge them when I teach and they don’t enjoy that part, but we all well up when we see what we’ve accomplished and part ways as real friends.

I’m also shooting with a global collective called 15×100 – 15 photos by 100 photographers. I was recently invited to join and have really been pushed to keep learning and improving my work by this close-knit group of photographers, most of whom have never met in person but who collaborate all the time.

Are you a photographer looking for feedback on your work? Come and join our  critique group hosted very month on Zoom. UPDATED: October 13, … END_OF_DOCUMENT_TOKEN_TO_BE_REPLACED

Another non-photo related posting but I just had to sing the praises of one of America's most enlightended human beings: Dick Gregory. This MAN speaks … END_OF_DOCUMENT_TOKEN_TO_BE_REPLACED

In my opinion, Senator Barack Obama is the voice of TRUTH in this presidential election campaign. Yes, OK, he should be talking about the state of the … END_OF_DOCUMENT_TOKEN_TO_BE_REPLACED

Blonde hair, blue eyes, Barbie doll-like proportions, strutting your stuff in a barely-there swimsuit: none of these will qualify a woman to win the … END_OF_DOCUMENT_TOKEN_TO_BE_REPLACED

It's been a long time since I've posted any photographer interviews... So I'm kicking off the 2013 interviews with Nakeya Brown, a young photographer … END_OF_DOCUMENT_TOKEN_TO_BE_REPLACED

SLUM-TV wants to documents the lives of the people in the slum and to reevaluate these lives through the camera. A camera always attracts attention. … END_OF_DOCUMENT_TOKEN_TO_BE_REPLACED

This week we lost Mr. Withers (85), a relatively unrecognized photographer who documented some of the most memorable moments and people in (African-) … END_OF_DOCUMENT_TOKEN_TO_BE_REPLACED

Produced by the National Film Board of Canada, 1967These films reveal the live reality of traditional Eskimo life before the European … END_OF_DOCUMENT_TOKEN_TO_BE_REPLACED

These photos are long overdue... my 4-day trip to TT back in March 2007 was so relaxing, inspiring, yummy (i love doubles!) and enlightening. Most of … END_OF_DOCUMENT_TOKEN_TO_BE_REPLACED

Gallery Owner Arnika DawkinsD&B: What inspired you to open a fine art photography gallery? AD: After obtaining my Master of Arts at the Savannah … END_OF_DOCUMENT_TOKEN_TO_BE_REPLACED

On Friday, September 14th after work I headed on down to the Chelsea Barnes & Noble for an artist meet & greet/book launch of The Moving Images of … END_OF_DOCUMENT_TOKEN_TO_BE_REPLACED

By Felicia Cousart Matlosz / The Fresno BeeFor all his fame as a writer, William Saroyan also cut a compelling figure on film. In photographs, to be … END_OF_DOCUMENT_TOKEN_TO_BE_REPLACED