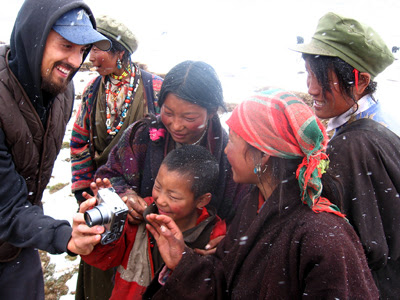 Last Friday I went to the opening of a student show at ICP. The photographers were students who had taken the shots during a trip to various regions India and the East. There were some beautiful images, but overall I was not impressed. It’s not hard to take an aesthetically beautiful shot of women in colorful saris or snow-capped mountains. It is difficult, however, to connect with people who are foreign to you (and you to them) and to establish a connection when you have a camera in their face.

A rising photojournalist currently residing in Beijing, Tom Carter’s work has that kind of intimacy I don’t often see.

His dedication to capturing the daily life and culture of the people of China is evident in the fact that he’s one of the first foreigners to travel to all 33 provinces and autonomous regions.

Before he was a photographer, Tom was headed for a career in politics. He took 2 years off from studying Political Science at Washington D.C.’s American University to work on a Republican presidential campaign during the 1996 U.S. primaries, but eventually became disenchanted with politics.

Here’s an excerpt from an ForeignerCN.com interview of Tom Carter by Krokodil Han:

“After disassociating himself with politics, his one-and-a-half-year backpacking trip around Mexico, Central-America and Cuba was aimed at literally “finding himself”. Tom’s father is from Panama and his great-grandfather from Cuba. So throughout his travels he was trying to rediscover his heritage within Latino culture because “that’s half of what I am”.

“It is poor, but colorful; it is beautiful, proud and strong.” But even the Latin America he visited just 8 years ago has already dramatically changed. Under the process of globalization, Tom realized this kind of cultural conflict must be happening in many other countries and regions around the world, and thus he eventually arrived in China.

Since carrying the same patched-up backpack all the way to the P.R.C., Tom has found amazing similarities between indigenous Latino and Chinese cultures. “If you put the Indians of Guatemala and the ethnic minorities from Yunnan together, you might be hard pressed to tell who is from where. Visually, they are almost identical: dark brown skin, colorful hand-stitched clothes with remarkably similar patterns, agrarian-based societies residing primarily in the mountainous regions, and each struggling to subsist while fighting to preserve their ancient heritage.”

“I think that strengthened my bond with Chinese culture. It made me realize that we are alike, that we are all related in some way.”

Are you a photographer looking for feedback on your work? Come and join our  critique group hosted very month on Zoom. UPDATED: October 13, … END_OF_DOCUMENT_TOKEN_TO_BE_REPLACED

On his website, the photographer describes this current series as "color portraits of Mexicans from across the country and the social … END_OF_DOCUMENT_TOKEN_TO_BE_REPLACED

Priya Kambli's imagery struck me when I received an email about her solo show in the 2010 Fotofest Biennial. There's something so visually arresting … END_OF_DOCUMENT_TOKEN_TO_BE_REPLACED

On the morning of July 18, 2007 we lost another great Black man: Sekou Sundiata. It's sad but until I heard about his passing, I never really delved … END_OF_DOCUMENT_TOKEN_TO_BE_REPLACED

NY Times staff photographer Chester Higgins, Jr. has dedicated his life to documenting the African Americans, Africans, and African of the Diaspora … END_OF_DOCUMENT_TOKEN_TO_BE_REPLACED

Grand Valley State University1 Campus Dr.Allendale, MI 49401-9403The Department of Classics and the Office of Multicultural Affairs and African … END_OF_DOCUMENT_TOKEN_TO_BE_REPLACED

This project consists of a series of 16 color portraits of people of mixed ethnic origin in front of primary color backgrounds. The images challenge … END_OF_DOCUMENT_TOKEN_TO_BE_REPLACED

Gallery Owner Arnika DawkinsD&B: What inspired you to open a fine art photography gallery? AD: After obtaining my Master of Arts at the Savannah … END_OF_DOCUMENT_TOKEN_TO_BE_REPLACED

Emerging photographers and photo-based artists based in New York City or the tri-state area should not miss this event. A 2-hour seminar led by one of … END_OF_DOCUMENT_TOKEN_TO_BE_REPLACED

Another one of those posts that has nothing to do with photography per se, but it is a story that counters the negative and perverse nature of hip-hop … END_OF_DOCUMENT_TOKEN_TO_BE_REPLACED

Due to recent comments that got out of control, I am posting these rules. Please read and adhere to them when commenting and if you don't like the … END_OF_DOCUMENT_TOKEN_TO_BE_REPLACED