This month Dodge & Burn kicks off a monthly series of posts about new photography books and shows. Feel free to send me any tips or announcements to contribute.

Mil Besos: 1,000 Kisses (Rizzoli)
This book is a must-have for your coffee-table collection, featuring dramatic photographs of the flamenco women of Spain shot by Colombian-born Ruven Afanador with an introduction by Christian Dior’s head designer John Galliano plus contributions from fashion icons Diane Von Furstenberg, Iman and Heidi Klum.

You may recognize Afanador’s unique style from his many editorials in Vogue, Vanity Fair and Italian Elle, among others.

Preview these gritty yet elegant black and white fashion portraits: watch this video of a public exhibition of Ruven Afanador’s Mil Besos in Sevilla Spain on the Avenida de la Constitución, with music by the brilliant duo Bebo y Cigala. The book will be released on September 29, 2009. 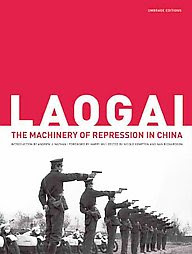 Laogai: The Machinery of Repression in China (Umbrage Editions)
Released to coincide with the 60th anniversary of Communist rule in China, edited by Nicole Kempton and Nan Richardson, with essays from renowned dissident Harry Wu and eminent China scholar Andrew Nathan.

An eloquent and vivid summary in shocking, never-before-seen photographs smuggled out of the People Republic of China, LAOGAI exposes the human rights record of the world’s most authoritarian state—a nation whose own remarkable transformation has not extended to the basic demands of its people’s freedom.

Watch a slide show of the photographs on the Umbrage Gallery blog.

In other photography news, congratulations to photojournalist Lynsey Addario who has won a MacArthur grant for her depiction of contemporary life in Darfur, Afghanistan and Iraq.

STAY IN TOUCH
Get updates on new photographer interviews plus news on contests, art shows and informed commentary on what’s happening with diversity in photography. Subscribe to Dodge & Burn Photography Blog: Diversity in Photography by Email

Are you a photographer looking for feedback on your work? Come and join our  critique group hosted very month on Zoom. UPDATED: October 13, … END_OF_DOCUMENT_TOKEN_TO_BE_REPLACED

Book description from the website: "While working on the book Moksha, Sheikh went to Vrindavan, one of India’s holy cities, where Hindu widows come to … END_OF_DOCUMENT_TOKEN_TO_BE_REPLACED

I got nothing but LOVE for this talented, brave and pioneering young woman. Why is it that the U.S. media and the Hollywood Hate Machine insists on … END_OF_DOCUMENT_TOKEN_TO_BE_REPLACED

Established in 2003, the McKenna Museum of African American Art, 2003 Carondelet St. (corner of St. Andrew Street), has not been open to the public … END_OF_DOCUMENT_TOKEN_TO_BE_REPLACED

New York City, December 10-14, 2008Featuring a photographic gallery opening and exhibition, from among the world's greatest international artists and … END_OF_DOCUMENT_TOKEN_TO_BE_REPLACED

Beautiful greeting cards made by a former Federal special-agent and now stay-at-home Mom, Robin McNeil.Excerpt from the website's "About Us" page: … END_OF_DOCUMENT_TOKEN_TO_BE_REPLACED

Non-photo based artwork but relevant to the subject of DODGE & BURN... I just LOVE the image of a giant Mickey Mouse hand flicking the little girl. … END_OF_DOCUMENT_TOKEN_TO_BE_REPLACED

Some heads might roll at Vogue :) Excerpt from WWD.com's coverage:"...a spokesman for Vogue said: "The Shape Issue celebrates athleticism from start … END_OF_DOCUMENT_TOKEN_TO_BE_REPLACED

The Millennial Generation’s Revolution Will Not Be Televised

Just thought I'd share an xcerpt from the Monday, February 18th posting titled "No Country for Old Men" in the Major Conflict blog:"The authors of the … END_OF_DOCUMENT_TOKEN_TO_BE_REPLACED

In this TED Talks video with Ryan Lobo, the freelance photographer talks about his coverage of a Liberian war criminal's plea for forgiveness, UN … END_OF_DOCUMENT_TOKEN_TO_BE_REPLACED

Graciela Iturbide, internationally recognized for her iconic images of Mexico, was named the 2008 winner of the prestigious Hasselblad Foundation … END_OF_DOCUMENT_TOKEN_TO_BE_REPLACED