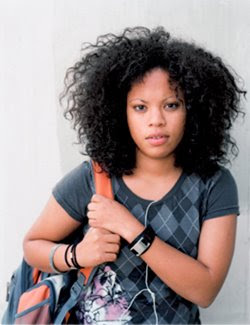 Usually I find subway billboards to be an eyesore but this morning an ad for the USA Network’s “Character Project” held my gaze.

With the support of the Aperture Foundation, the USA Network assembled a team of 11 world-class photographers to capture the character of America during the summer of 2008. Film for many of the 11 projects was kindly provided by Kodak.

The photographers’ work will be showcased in a book entitled American Character: A Photographic Journey, published by Chronicle Books and available beginning March 17th.

I thought this was a really unique way to capitalize on USA’s iconic “Characters Welcome” brand and was pleasantly surprised to find one of my favorite portrait photographers, Dawoud Bey, as part of the project.

Here’s a list of all 11 photographers and their subjects:

* Dawoud Bey: Photographed a diverse cross-section of young Americans near Chicago’s Columbia College where he has taught for many years.

* Jeff Dunas: Shot a color series in and around Los Angeles documenting the American summer experience.

* David Eustace: Shot portraits and landscapes as he traveled along the entirety of Route 50, one of the oldest transcontinental roads, stretching over 3000 miles from the Pacific to the Atlantic.

* Joe Fornabaio: Photographed individuals at barbershops and salons in the New York metro area in order to capture characters engaged in a classic American ritual — the haircut.

* Mary Ellen Mark: Documented festivals, parades and summer traditions in one of her favorite places to photograph: New York City.

* Eric McNatt: Photographed the “wild and wooly, quiet and intense, quirky and idiosyncratic spirit” of his hometown, Brownwood, Texas.

* Sylvia Plachy: Captured the “spirit of the south” through a series of portraits and panoramas in Mississippi.

* Richard Renaldi: Photographed the character of Alaska on its 50th anniversary as a U.S. state.

* Marla Rutherford: Shot portraits of individuals from around Los Angeles who had never before been professionally photographed.

You can see the project’s photographs online at the Character Project website.

Are you a photographer looking for feedback on your work? Come and join our  critique group hosted very month on Zoom. UPDATED: October 13, … END_OF_DOCUMENT_TOKEN_TO_BE_REPLACED

Excerpt from the interview with Piper Carter from Sylvia's "I Like Her Style" blog: Would you say being a black woman has helped or hindered your … END_OF_DOCUMENT_TOKEN_TO_BE_REPLACED

Excerpt from book review by Kam Williams: Jerry Taliaferro, the author, says in the preface of his new book, "Women of a New Tribe: A Photographic … END_OF_DOCUMENT_TOKEN_TO_BE_REPLACED

Got this valuable info from the En Foco newsleter... The Bronx Council on the Arts and the Urban Artist Initiative/ NewYork City (UAI/NYC) announce … END_OF_DOCUMENT_TOKEN_TO_BE_REPLACED

Another one of those posts that has nothing to do with photography per se, but it is a story that counters the negative and perverse nature of hip-hop … END_OF_DOCUMENT_TOKEN_TO_BE_REPLACED

By Felicia Cousart Matlosz / The Fresno BeeFor all his fame as a writer, William Saroyan also cut a compelling figure on film. In photographs, to be … END_OF_DOCUMENT_TOKEN_TO_BE_REPLACED

This week we lost Mr. Withers (85), a relatively unrecognized photographer who documented some of the most memorable moments and people in (African-) … END_OF_DOCUMENT_TOKEN_TO_BE_REPLACED

Due to recent comments that got out of control, I am posting these rules. Please read and adhere to them when commenting and if you don't like the … END_OF_DOCUMENT_TOKEN_TO_BE_REPLACED