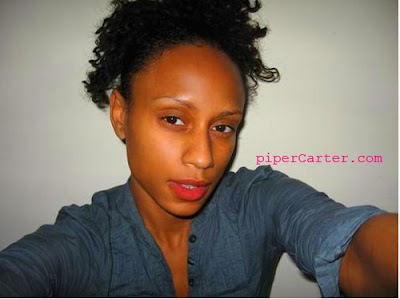 One of the fellow photographers on Twitter, I met Piper Carter after she replied to my tweet about interning at the now defunct NV Labs in NYC’s meatpacking district. At NV I helped develop and spot tone the black & white prints of photographers like Steven Klein, with whom Piper worked as an assistant at the time.

Specializing in fashion, editorial and beauty, Piper has shot for major glossies like British Elle and French Vogue plus other notable magazines like Trace, Essence and many more. Piper took some time out of her busy schedule to grant Dodge & Burn an interview – read on to find out how this woman has created her own photography destiny.

How did you get started in photography – any “formal” training?
Yup. I studied Photography @ Howard University then Fashion Institute of Technology where I was in the first graduating class of the newly formed BFA Program.

What cameras or techniques do you use?
I use Hasselblad with Leaf or Phase or Sinar back.
um I don’t have any standard techniques.
I usually light according to the idea.
But I am an Avedon fan, & I do love the Northern Renaissance, so quite often I start with these references.
I do extensive picture research before I shoot a job, going back & forth with Art Directors.
I’m always reading books about Photography as well as Autobiographies by Photographers.
I live for the Library!

Have you experienced any setbacks or different treatment along your photography career that you would attribute to being a female and/or photographer of color?
of course when you are traveling on seldom trotted territory there are some surprises and adjustments.
however, through having to make certain adjustments I have learned perseverance, and my drive and endurance were strengthened.

What do you hope to achieve with your photography?
well first of all, I love what I do and I’m very blessed to have found something that I love that can both sustain me and allow me to give back to the universe.
I hope to reveal the universe’s hidden treasures: I love new faces! And I hope to provoke a moment where light can enter one’s realm of consciousness even for just a split moment.

What’s your dream photography project?
oh boy! I can dream pretty big. But just putting it out there, I’d love to shoot stills and video for a visionaire project where they feature my work on a world tour. It would be a collaboration with marc jacobs. We’d shoot it very bollywood meets french new wave cinema. I imagine a short fashion film with an original score by mos def and santogold. Eventually it would end up at the moma.

What are you shooting now?
I cannot say because I signed a confidentiality agreement but I can say it’s for a major television network.
and I’m developing my fashion film ideas: “video is the new photography”.

Are you a photographer looking for feedback on your work? Come and join our  critique group hosted very month on Zoom. UPDATED: October 13, … END_OF_DOCUMENT_TOKEN_TO_BE_REPLACED

17 May - 14 June 2008Now in it's 18th year, the Hereford Photography Festival is the UK's longest running annual celebration of the photographic … END_OF_DOCUMENT_TOKEN_TO_BE_REPLACED

"Blend Images is the world's leading multiethnic commercial stock agency."Nuff said. Go visit now. I especially urge those of you in the print world … END_OF_DOCUMENT_TOKEN_TO_BE_REPLACED

Check out this video interview with singer songwriter Santigold and artist Wangechi Mutu. Both women discuss their video collaboration titled, The End … END_OF_DOCUMENT_TOKEN_TO_BE_REPLACED

Show features 'Photographs and the Revolutionary Art of Emory Douglass'Excerpt from The California Aggie article by Sonia Parecadan:"Often painted as … END_OF_DOCUMENT_TOKEN_TO_BE_REPLACED

Cover for Only Skin Deep, edited by Coco Fusco and Brian WallisThis is my first Summer off since graduating college 13 years ago! It's been nice … END_OF_DOCUMENT_TOKEN_TO_BE_REPLACED

Maurice Henri is a photographer whose exhibit on photographs of village life in South Africa has received critical and popular acclaim. Maurice Henri, … END_OF_DOCUMENT_TOKEN_TO_BE_REPLACED

The Photography.Book.Now International Juried Competition is an international juried self-published book competition, and a celebration of the most … END_OF_DOCUMENT_TOKEN_TO_BE_REPLACED

By Julia TanskiSome good commentary and links to galleries in here... read it. … END_OF_DOCUMENT_TOKEN_TO_BE_REPLACED