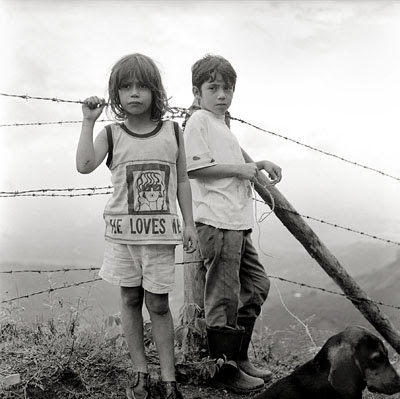 During these past few decades the image of Colombia as a lawless society dominated by drug lords has developed. I remember countless movies or TV shows showcasing Colombian mafiosos and their cronies (Can you say, Miami Vice?). When images of Colombia were presented it was either the extravagant hacienda of a drug lord or the poor villages or jungles where everyone else supposedly lived. A good recent example is the movie “Mr. And Mrs. Smith” where Bogotá is depicted as a tropical jungle. Bogotá is a modern metropolis of nearly 5 million people and there isn’t any jungle within hundreds of miles. I don’t blame the filmmakers, however. If they showed Bogotá the way it actually is nobody would buy it. I wouldn’t have believed it myself if I hadn’t visited Colombia, so ingrained are these mass media stereotypes.

Experiencing the beauty and diversity of Colombia and its culture for the 1st time as a 20 year-old college student completely changed my life. Previously, I had been ashamed of my heritage because of all the negativity surrounding Colombia, but after that trip I accepted and embraced it. A few years ago I began planning “True Faces of Colombia.” I realized that I had to do something to change people’s perceptions of Colombia and as a photographer I had a way to do it.

True Faces of Colombia is my attempt to present Colombians as they truly are– to give a variety of faces to a people who have been denied them by the media. Most of my time was spent in Cali and the surrounding Departamento (state) of Valle del Cauca. Despite tough economic conditions and other challenges, Caleños are known to be the happiest and most fun loving people in Colombia. Now you have an opportunity to meet some of them and learn a little about Colombian culture as well.

I would like to thank the Independence Foundation and the National Association of Latino Arts and Culture (NALAC) for their support, without which this project and exhibition would not have been possible.

Are you a photographer looking for feedback on your work? Come and join our  critique group hosted very month on Zoom. UPDATED: October 13, … END_OF_DOCUMENT_TOKEN_TO_BE_REPLACED

This year AIPAD held five panels, here are my notes from two that I was able to attend. Panel #1 Curator's Choice: Emerging Artists in … END_OF_DOCUMENT_TOKEN_TO_BE_REPLACED

Here's a story and photography book that explores the search for identity. Many of us and those before us have experienced identity lost because of … END_OF_DOCUMENT_TOKEN_TO_BE_REPLACED

My Interview on The Candid Frame Podcast

For those of you who don't know what a podcast is, here's a quick definition from Wikipedia: "A podcast is a type of digital media consisting of an … END_OF_DOCUMENT_TOKEN_TO_BE_REPLACED

"Weems explores issues from both sides of camera" By Vanessa E. Jones … END_OF_DOCUMENT_TOKEN_TO_BE_REPLACED

By Felicia Cousart Matlosz / The Fresno BeeFor all his fame as a writer, William Saroyan also cut a compelling figure on film. In photographs, to be … END_OF_DOCUMENT_TOKEN_TO_BE_REPLACED