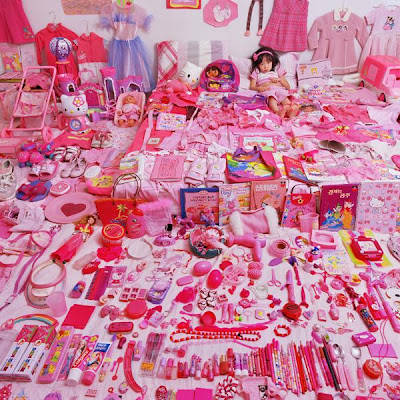 “This project began with my daughter. My seven-year-old daughter loves pink. She wants to wear only pink clothes and only own pink toys and objects. My daughter is not unusual. Most other little girls in the United States and South Korea love pink clothing, accessories and toys. This phenomenon seems widespread among various ethnic groups of children regardless of their cultural backgrounds. This preference is the result of cultural influences and the power of pervasive commercial advertisements such as those for Barbie and Hello Kitty. Through advertising, customers are directed to buy blue items for boys and pink for girls. Blue has become a symbol of strength and masculinity, while pink symbolizes sweetness and femininity.

To make The Pink and Blue Project series, I visited children’s rooms, where I displayed their possessions in an effort to show the viewer the extent to which children and their parents, knowingly or unknowing, are influenced by advertising and popular culture.”

Personally, as a female I’ve had my own love/hate relationship with the color pink. Naturally I’m more attracted to earth tones, but as a teenager I too fell victim to the girl-hypnotizing color of pink. I love how the little girl in this photo is almost doll-like in her pose and just a speck amongst the garbage dump of pink items. A great theme to tackle via color photography. There’s much to say here about gender stereotypes and the socialization of girls vs. boys…

See more photos from this body of work at PhotoLucida’s Critical Mass Top 50 of 2007.

Are you a photographer looking for feedback on your work? Come and join our  critique group hosted very month on Zoom. UPDATED: October 13, … END_OF_DOCUMENT_TOKEN_TO_BE_REPLACED

Excerpt from the Korea Times article by Cathy Rose A. Garcia:"Photographer Atta Kim believes that ``all that exists will eventually disappear.'' A … END_OF_DOCUMENT_TOKEN_TO_BE_REPLACED

Last Friday I went to the opening of a student show at ICP. The photographers were students who had taken the shots during a trip to various regions … END_OF_DOCUMENT_TOKEN_TO_BE_REPLACED

Semi off topic for this photo-focused blog, I know, but this article ("It's a Man's World: The Politics of Black Masculinity" by Lavelle Porter) is so … END_OF_DOCUMENT_TOKEN_TO_BE_REPLACED

This year AIPAD held five panels, here are my notes from two that I was able to attend. Panel #1 Curator's Choice: Emerging Artists in … END_OF_DOCUMENT_TOKEN_TO_BE_REPLACED

I got nothing but LOVE for this talented, brave and pioneering young woman. Why is it that the U.S. media and the Hollywood Hate Machine insists on … END_OF_DOCUMENT_TOKEN_TO_BE_REPLACED

Through portraits in her work titled "[sur]passing", Lola Flash (love the name!) explores how Black folks around the (modern) world experience what … END_OF_DOCUMENT_TOKEN_TO_BE_REPLACED

On the morning of July 18, 2007 we lost another great Black man: Sekou Sundiata. It's sad but until I heard about his passing, I never really delved … END_OF_DOCUMENT_TOKEN_TO_BE_REPLACED

In honor of today's celebration, I thought I might profile just a few of the many past and present talented Chinese photographers. They all blaze a … END_OF_DOCUMENT_TOKEN_TO_BE_REPLACED