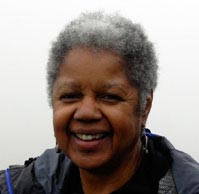 Known for incorporating change, transformation, and complication in her work as a means of fostering social justice, photographer Clarissa Sligh will exhibit her art in three displays at Haverford College, February 22-April 13: “Jake in Transition,” “100 Americans: A Presence of the Past In Philadelphia” and “Masculinities. An opening reception will be held Friday, February 22, from 5:30-7:30 p.m. in Stokes Hall, Rooms 102 and 106. These exhibits are made possible through the John B. Hurford ’60 Humanities Center Leaves of Grass Fund.

100 Americans: A Presence of the Past in Philadelphia will be shown in the Multicultural Center, located in Stokes Hall Room 106. This exhibit was originally commissioned by the Rosenbach Museum and Library. Sligh took digital portraits of citizens of African descent in the streets of Philadelphia and then hung 100 portraits as an introduction to the museum’s exhibit on African-American histories. As she met her subjects and asked them for their participation, she talked about the exhibit and encouraged them to visit it. Her goal was to bridge the gap between African Americans in Philadelphia and one of the city’s leading cultural institutions. The men and women in her photos stand as subjects and spectators, intervening in the museum experience.

The Magill Library Study Gallery will house Masculinities, in which images such as a stay-at-home dad, a burly flower arranger, a “butch” female in repose, and a gun-toting cowgirl challenge gender assumptions and boundaries in order to interrogate them.

Jake in Transition will be featured in the gallery of the Hurford Humanities Center, located in Stokes Room 102. This photo essay chronicles a female-to-male transition and interprets transgender identities through narratives of racial “passing.” As over the course of the year Deborah becomes Jake, the metamorphosis evokes generations of African Americans who passed for white as they sought freedom. Sligh links Jake’s transsexual journey to the historical account of runaway slave couple Ellen and William Craft, who “passed” as two males, master (white) and slave (black) during their escape. She recounts these interwoven stories in a limited edition artist’s book, “Wrongly Bodied Two,” on display as part of the exhibition.

A roundtable discussion on “Jake in Transition” will be held Friday, April 4, from 4:30-6:30 p.m. in Gest Hall Room 101. Participants include Sligh; Israel Burshatin, Barbara Riley Levin Professor of Comparative Literature, Professor of Spanish, and curator of the exhibit; Gayle Salamon, Costen LGBT Postdoctoral Fellow from the Society of Fellows in Liberal Arts at Princeton University; Heidi Schlipphacke, Visiting Associate Professor of German; and William E. Williams, Professor of Fine Arts. They will address issues of photography and transgenderism, the affinities
and differences between racial and sexual “passing,” and the roles of performance and narrative in the fashioning of gendered and racialized bodies.

At age 15, Clarissa Sligh was the lead plaintiff in the 1955 school desegregation case in Virginia. Since that time, she has combined photographs, drawings, text, personal stories and social justice issues to open up conversations on provocative themes. She received the Leeway Foundation Art and Change Grant in 2006, and has been awarded fellowships from Anonymous Was a Woman (2001), the Andrea Frank Foundation (2000),
the National Endowment for the Arts (1988), and the New York Foundation for the Arts on multiple occasions. She also received the Annual Infinity Award from the International Center of Photography in 1995 and the Annual President’s Award from the National Women’s Caucus for Art in 1994. In addition to Wrongly Bodied Two, her publications include Voyage(r): “A Tourist Map to Japan”; “Reading Dick and Jane with Me”; and “What’s Happening to Momma?” Sligh holds a B.A. from the Hampton Institute, a B.F.A. from Howard University, an M.B.A. from the University of Pennsylvania, an M.A. from Texas Women’s University, and an M.F.A. from Howard. She currently teaches at Penn and New York University.

Are you a photographer looking for feedback on your work? Come and join our  critique group hosted very month on Zoom. UPDATED: October 13, … END_OF_DOCUMENT_TOKEN_TO_BE_REPLACED

I love doing this blog because I learn just as much as I hope to teach others. From the aresponsibilityforspreadinghappiness blog: "According to one … END_OF_DOCUMENT_TOKEN_TO_BE_REPLACED

Her Word As Witness: Women Writers of the African Diaspora

Come join photographer Laylah Amatullah Barrayn for this artist talk/panel discussion in conjunction with her photography exhibition, Her Word As … END_OF_DOCUMENT_TOKEN_TO_BE_REPLACED

© Jaime Permuth, Untitled, Yonkeros series.Photographer Jaime Permuth has a wonderful B&W project called Yonkeros that will be featured as an En … END_OF_DOCUMENT_TOKEN_TO_BE_REPLACED

By Felicia Cousart Matlosz / The Fresno BeeFor all his fame as a writer, William Saroyan also cut a compelling figure on film. In photographs, to be … END_OF_DOCUMENT_TOKEN_TO_BE_REPLACED

Her work is controversial, yet I LOVE the simplicity of her notorious use of the silhouette and the powerful subtlety of her message(s). Walker's … END_OF_DOCUMENT_TOKEN_TO_BE_REPLACED

The CocoaChic Beauty site covered this important dialogue on "women, race & beauty" that took place on November 27, 2007. The discussion was moderated … END_OF_DOCUMENT_TOKEN_TO_BE_REPLACED

Sebastiao Salgado, 64, is probably the best-known Brazilian photographer (and arguably the "world's most widely viewed") of our time. I just came … END_OF_DOCUMENT_TOKEN_TO_BE_REPLACED

We've all heard about iconic Black photographers like Gordon Parks and James VanDerZee, but today I found out about the "founder of African-American … END_OF_DOCUMENT_TOKEN_TO_BE_REPLACED