Patricia Silva: Where are you from and where do you live/work?

Hernease Davis: I was born and raised in Los Angeles. Now, I live in Brooklyn and have my studio here as well. I also work in a wonderful museum in Manhattan during the day.

HD: Once upon a time, I was a biologist. I took a Photo 101 class in my last semester of senior year in undergrad. I had never had so much fun or worked so hard or pulled so many all-nighters. I loved it. I graduated with a Bachelor’s in biology, but started figuring out ways to study and practice more photography while I put my degree to use back in L.A.

I moved to Philadelphia a bit later and that is where I really started transitioning from being a biologist into professional photography. I worked in a dairy lab at night, and during the day I assisted an amazing dance photographer on all sorts of commercial and portrait shoots. I continued taking courses and used my class assignments to experiment with my own work. My time in Philly encouraged me to pursue my MFA. I was beginning to seek feedback and instruction on my personal, noncommercial work. It was an excuse to experiment with light, exposure, and taking my friends to Clark Park at night and making them sit very, very still. It gave me an excuse to create something that had nothing to do with a client, and had everything to do with my obsession with the elements of photography. 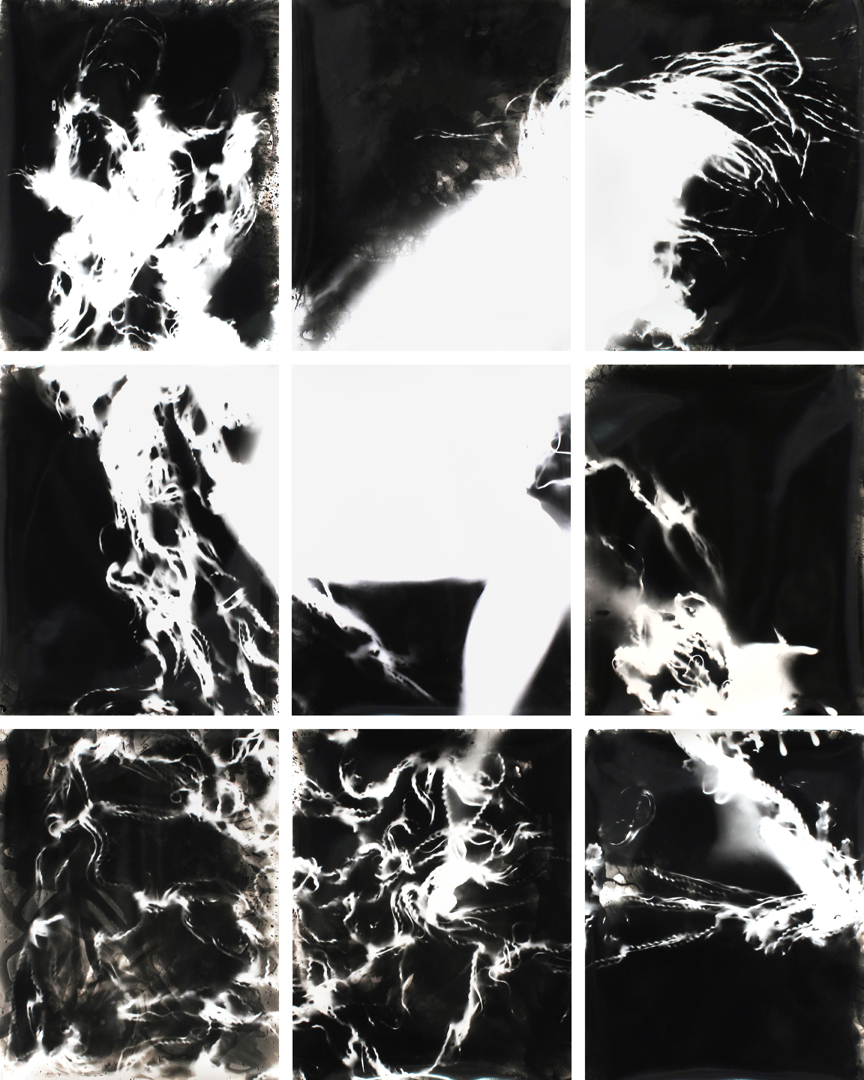 Hernease Davis, A Womb of My Own (Mistakes Were Made in Development), #8

HD: Early on, I loved the simple act of mixing darkroom chemicals. Since I had a pretty deep background in science and research, that’s what I felt most qualified to do. I was also obsessed with lenses and bought a few books to read everything I could about cameras, lenses, focal lengths, glass. Finding the perfect lens during my senior year of college was a thing. I was on eBay a lot. Whenever I would be at work, or in class, I would spend my break checking my email to see if someone beat my bid. I still have a pretty lean collection of great SMC lenses with K-mounts that I would choose from, very, very carefully to shoot my class assignments. And now, I love the flexibility of photography, black and white specifically. I am still learning so much about processes, and what happens when you just let loose in the darkroom a bit.

PS: Your A Womb of My Own photogram, currently in a group show at Foley Gallery, is visually striking and I’m curious about your choice of words. How did you come to choosing this word, ‘womb’, for this work?

HD: Coming up with titles is the least fun thing when it comes to making work, and sometimes I default to no title at all.  I was listening to an interview, probably on NPR, where they mentioned Virginia Woolf’s A Room of One’s Own. I had never heard of it, and still have not read it. I was not interested in referencing it, specifically, because the sentiment of the writing is what I recognized in what I was already creating. There was this encouragement of freedom and turning inward to create apart from outside expectations and perceived limitations from others. I connected with the defiant ownership suggested in the title. I knew from the very beginning that this, then untitled, series was going to be an experiment in starting over.  When I heard the word “room,” “womb” clicked into my head. At the time, I wanted to be literally born again. The word “womb” was my way of referencing the sentiment of my process since my work may or may not communicate that directly. 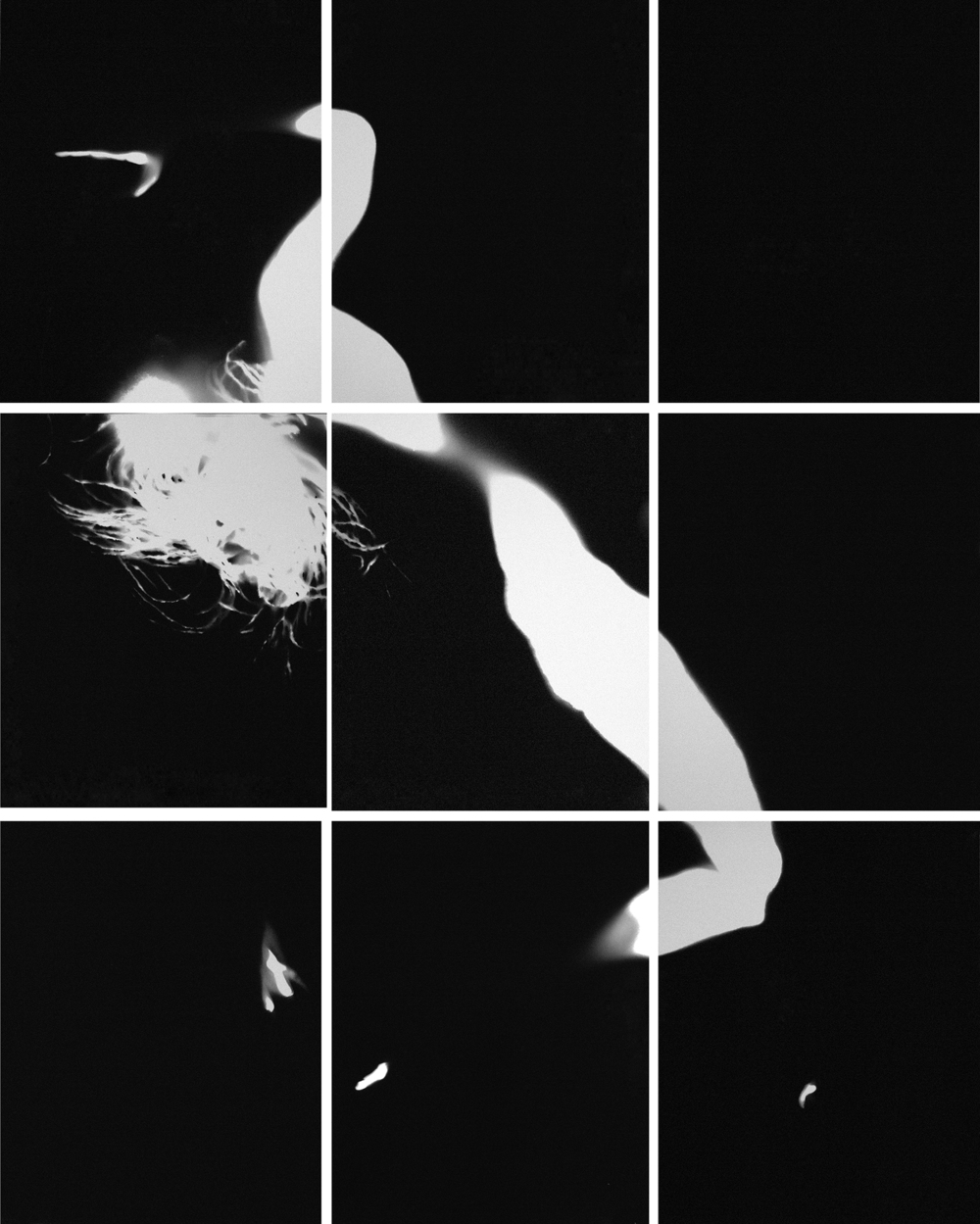 Hernease Davis, A Womb of My Own (Mistakes Were Made in Development), #3

PS:  So, let’s take a step back. How did this series begin?
HD: This is a really hard question to answer, because it is purely an emotional one. My work does not usually begin this way. When conceptualizing my work, I sometimes write first and take time to think about all the elements that I want, what they mean, and how they may be interpreted by a viewer. I envision it and problem solve along the way… in my head. At the heart of Womb, however, is deep trauma, sadness and a loss that I am pretty sure will be with me forever. I will point out that, in addition to A Womb of My Own, I’ve added a parenthetical statement: (Mistakes Were Made in Development). The entire title is both a declaration of independence, and a passive accusation—my response to a fractured family history, and a recognition that my make-up has been a painful inheritance.

With Womb, I started making it out of a pure need to express something irrational, and impossible. I wanted to start my life over again. I wanted a do-over. What would it be like if I could raise myself, with the care I wanted and needed? So, knowing that time travel isn’t a thing, yet, and how physical laws don’t allow for you to be your own parent, I decided to get as close as possible to it by just creating. I knew that whatever came out of me was not going to be ABOUT beginning again, necessarily. I set out to create “whatever”, as if I were a brand new person who gave zero fucks about anyone but herself. I made sure to only create “whatever” when I felt like I needed to, and in a manner that was easy and gentle. 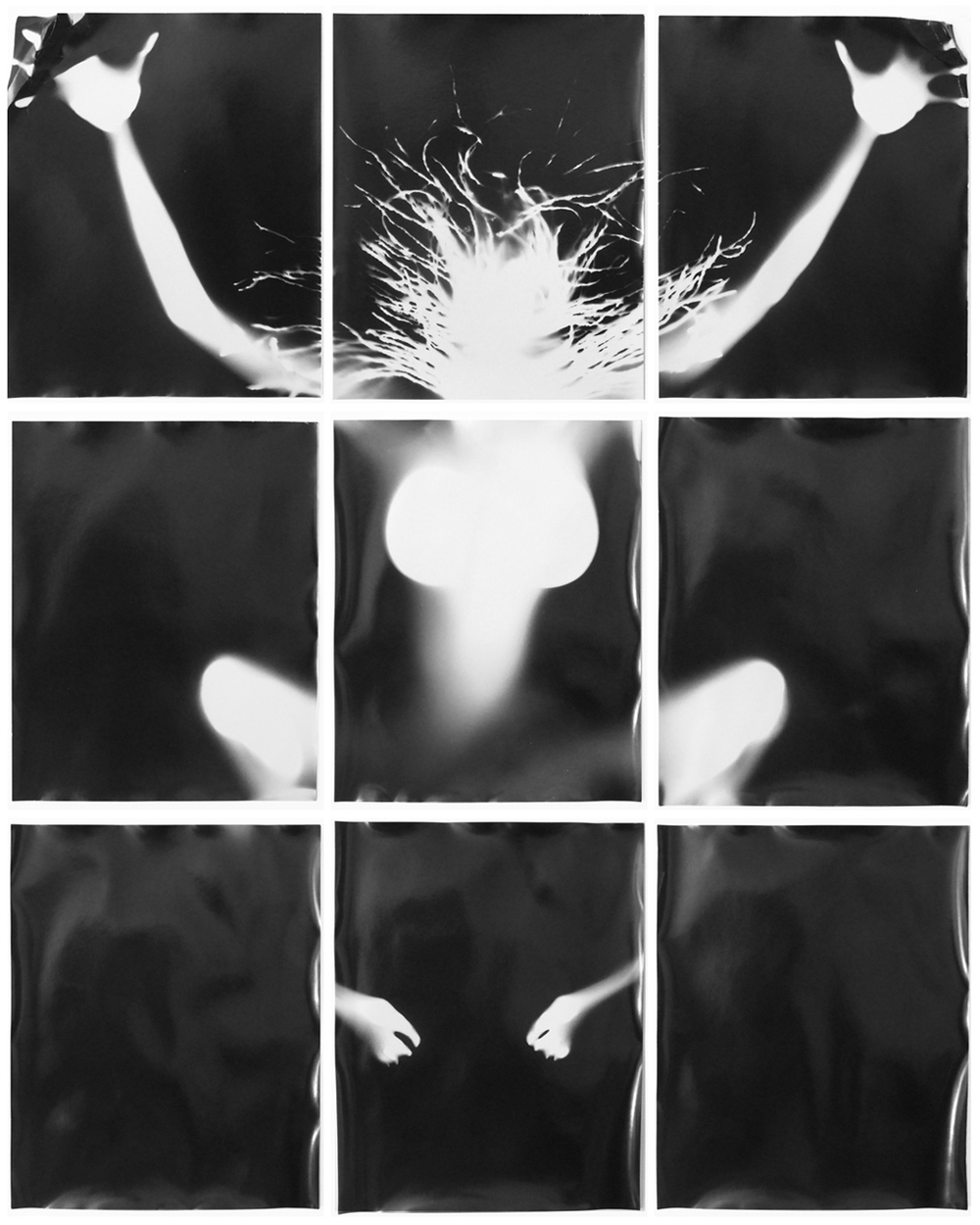 Hernease Davis, A Womb of My Own (Mistakes Were Made in Development), Charleston

PS:  I love it that you said that you wanted to be reborn again. I think image culture gives us the power of the image to re-create ourselves, through clothing, style, things, objects, etc. I think people of our generation are used to the cyclical waves of recreating ourselves, but you are clearly talking about something deeper. I am imagining your process of rebirth as one in which you are alone in a room, light comes on, an exposure is made. The point at which rebirth and exposure meet, is that moment important?

HD: Well, I am definitely speaking to my own specific nurturing environment where I am giving myself room for growth. I actually have never thought of rebirth, in this case, as one distinct moment in time, even though that is a very important aspect.  The “rebirth”, or my own self-discovery and self-nurturing, is a continuous learning experience—it is a weird, out-of-body observation of how I am changing and healing. The perpetually important aspect of all of this, is that I am selfishly kind in my practice.

That may mean going to my studio early on Saturday before my mates get there, just to sing at the top of my lungs, and that’s it. With the summer, I have started crocheting in Prospect Park. And, in the darkroom, I no longer use the timer before I fix my paper so I can feel out when the image is developed enough.  When I make photograms, I take my time to enjoy being quiet, in pitch black. Sometimes, if I feel like it, I’ll listen to a podcast while I lie still. Whatever I produce—photograms, blankets, pillows, sound pieces—is made in a way that is growing in consciousness with my needs.

Hernease Davis, A Womb of My Own (Mistakes Were Made in Development), #7

PS:  True, we can’t parent ourselves physically, but we can definitely try and give ourselves the nurtures we need. It’s very emancipating to give that to ourselves. Would you have reached this conclusion had you stayed with biology, rather than choosing a visual/image practice?

HD: I am so thankful to be having this back and forth with you. You ask such wonderfully challenging questions, and I feel like I could go on and on. I am pretty sure I would have reached the same conclusion. My response would have looked extremely different, though. Actually, now that you’ve asked this question, I am even more glad that I’m an artist and not a physician.

One of the most jarring realities of switching from biology was the loss of objectivity and the relatively safe haven of the scientific process. I had to re-develop my sense of self inside of a new professional realm that not only felt random and gray in its idea of value, but exposed me in personal ways that being a biologist never had and, I am sure, never would. This grayness and subjectivity of art was the thing with which I struggled the most, but is what I ran to when I was faced with needing something purely conceptual—rebirth! I was actually forced to embrace what I used to fear, but have now found to be the most wonderful aspect of art, which is, you can do whatever the fuck you want.

PATRICIA SILVA is a Lisbon-born, New York-based photo and video artist who has been writing cultural criticism about and around photography since 2010. Patricia earned a MFA in Advanced Photographic Studies from ICP-Bard College, after earning a BFA in Photography from the School of Visual Arts. In 2011, Patricia curated the first Luso-Brazillian Pop-Up Arts Festival in New York City. Patricia’s work has been exhibited and screened internationally, most notably at the British Film Institute, UK (2016); Cervantes Institute Brazil (2016); Ateliê da Imagem, Rio de Janeiro, Brazil (2015-2016); Berlin Biennale, Berlin, Germany (2012); and has been most recently shown at the Colorado Photographic Arts Center (2016). Follow Patricia at @senseandsight on Twitter.

Are you a photographer looking for feedback on your work? Come and join our  critique group hosted very month on Zoom. UPDATED: October 13, … END_OF_DOCUMENT_TOKEN_TO_BE_REPLACED

By Jessica DawsonSpecial to The Washington Post"Muslim Women in Germany," a new photography exhibition soon to reopen at the Goethe-Institut, proves … END_OF_DOCUMENT_TOKEN_TO_BE_REPLACED

The CocoaChic Beauty site covered this important dialogue on "women, race & beauty" that took place on November 27, 2007. The discussion was moderated … END_OF_DOCUMENT_TOKEN_TO_BE_REPLACED

New York City, December 10-14, 2008Featuring a photographic gallery opening and exhibition, from among the world's greatest international artists and … END_OF_DOCUMENT_TOKEN_TO_BE_REPLACED

Got this valuable info from the En Foco newsleter... The Bronx Council on the Arts and the Urban Artist Initiative/ NewYork City (UAI/NYC) announce … END_OF_DOCUMENT_TOKEN_TO_BE_REPLACED

I love doing this blog because I learn just as much as I hope to teach others. From the aresponsibilityforspreadinghappiness blog: "According to one … END_OF_DOCUMENT_TOKEN_TO_BE_REPLACED

A new photography exhibit at the California African American Museum. Read a review of the exhibit and see some of the photos on display in this L.A. … END_OF_DOCUMENT_TOKEN_TO_BE_REPLACED

Another non-photo related posting but I just had to sing the praises of one of America's most enlightended human beings: Dick Gregory. This MAN speaks … END_OF_DOCUMENT_TOKEN_TO_BE_REPLACED

Amazing photo documentary featuring portraits of a group of animal wranglers in Nigeria. Read more about the project and see the entire collection on … END_OF_DOCUMENT_TOKEN_TO_BE_REPLACED