On Tuesday, 9/23/14 at 7pm ET, join Qiana Mestrich, Laylah Amatullah Barrayn, Terrance Jennings and Emma Raynes for a panel discussion on “Curating Culture: Encouraging and Sharing Diverse Voices in Photography” following the screening of Through A Lens Darkly at Film Forum NYC: 209 West Houston Street (Btw Varick Street & Sixth Avenue) New York, NY 10014.
THROUGH A LENS DARKLY is on view in NYC from August 27 – September 25, 2014 at Film Forum, 209 W. Houston St., with screenings daily at 12:45, 2:50, 5:10, 7:20, 9:30. Check the link at the end of this post for more screening dates in other cities.

How do you tell the history of a visual medium that has, since it’s inception, depicted and influenced so many of the world’s cultures? It’s truly a daunting task at which many of the first photography history books failed, focusing largely on European (American) contributions.

The 2014 photography documentary Through A Lens Darkly: Black Photographers and the Emergence of a People (a First Run Features release, directed by Thomas Allen Harris) wholeheartedly embraces this task, emphasizing the role of the lens-based image within the lives of African Americans. The film is a “political, artistic and social history of photography” inspired by the work of historian, photographer, curator and chair of the NYU Department of Photography & Imaging, Dr. Deborah Willis (who is also a co-producer).

At the center of the film’s narrative is Thomas Allen Harris’ own family history. We hear his inquiries as to the insidious origins of derogatory words uttered to him by his own father. How his grandfather gave him and his brother (photographer/artist Lyle Ashton Harris) their first cameras. We also see the unique images of his own family album that attempt to conceal (yet often reveals) deeply buried secrets. Mixed in with the work of Black photographic legends, this reference to Harris’ own family lends a personal touch to what for some may feel is a classic textbook treatment on film.

Recalling often graphic examples of racist imagery created to dehumanize Black Americans, the film shows many examples of how (when empowered with the camera) photographers of color would choose to show themselves. Early in the film Jules Lion, a portrait artist and free man of color from France, is credited for introducing the daguerreotype (and thus photography) to the African-American community. Later, experts in the medium like J.P. Ball at Tuskegee University, helped establish formal photography education for the upwardly mobile. 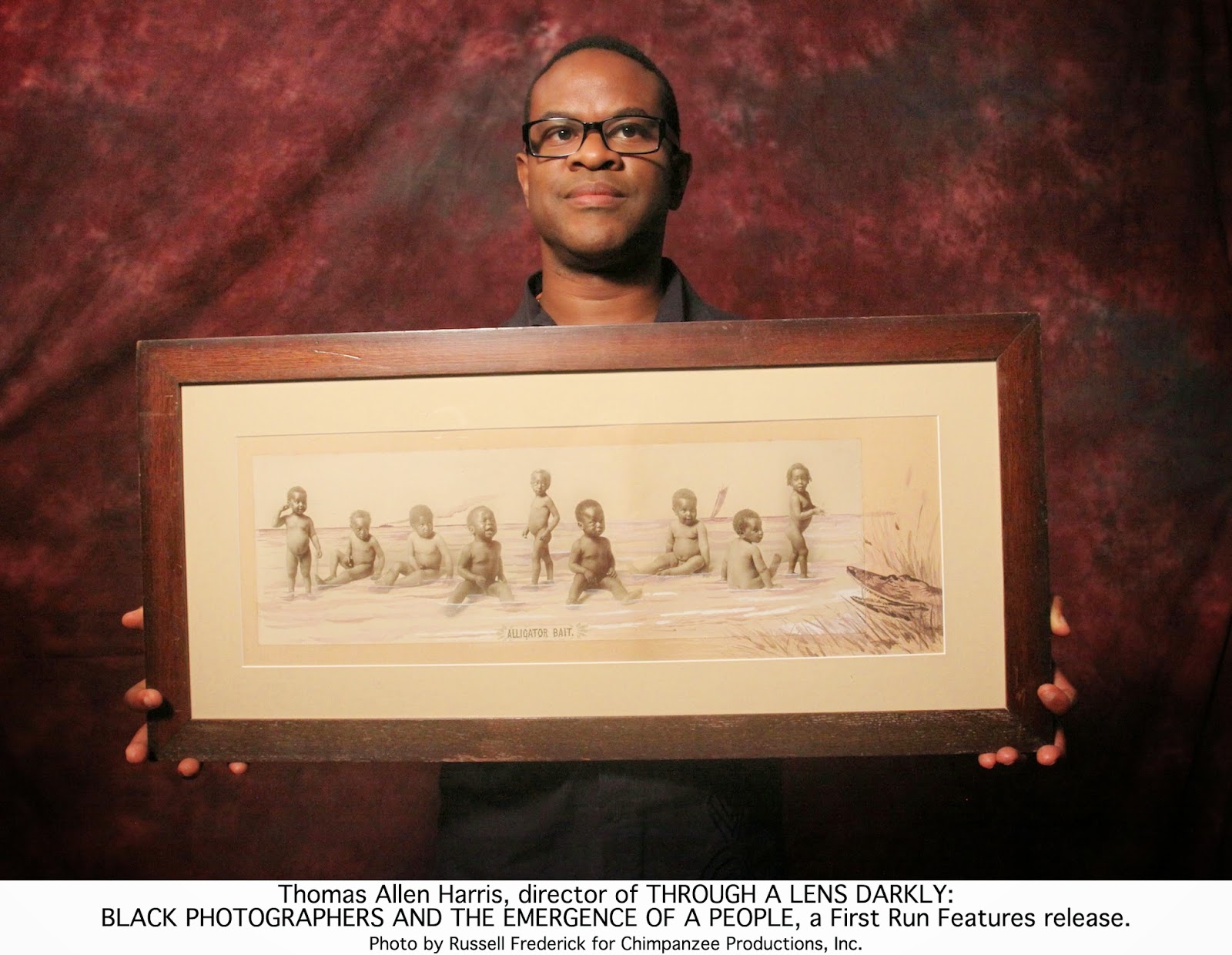 Mastering this medium that was strategically used for oppression is an important point raised in the film. We see how Sojourner Truth used her own portrait as a calling card for her civil rights work. While Frederick Douglass had over 150 formal portraits taken of himself. Both abolitionists knew that the photographic image, circulated amongst the public, was a powerful tool in their campaigns toward emancipation.

Although by no means a comprehensive list of all, some contemporary African-American photographers profiled and interviewed in the film include Roy DeCarava, Gordon Parks, Hugh Bell, Lorna Simpson, Carrie Mae Weems, Clarissa Sligh, Lewis Watts, Albert Chong, Jamel Shabazz, Renee Cox, Coco Fusco, Ernest Withers, Hank Willis Thomas, Anthony Barboza, James Van DerZee, Chester Higgins, Jr. and Lola Flash among others. (See the Black Photographers Annual and the Kamoinge collective for a list of others not as well known.) The film also makes a concerted effort to acknowledge the work of Black female photographers as well as those picturing the African-American queer/LGBT community.

The real magic of this film for me was watching the in-person interviews with photographers that I’d long admired and considered my mentors. Their words are memorable… “Family photographs are solid evidence that we exist,” states photographer, writer and educator Carla Williams talking about the power of vernacular photography. Historical footage of Roy DeCarava positing that “the wonderful thing about a photograph is that it escapes (these) time zones.” Carrie Mae Weems sounds a clarion call to photographers of color, saying that “we have a RESPONSIBILITY to share all of what Blackness can be… NOW.”

For a few years now I’ve followed the development of Through A Lens Darkly, from my post about its first trailer back in 2008 to the Kickstarter campaign and now its 2014 theatrical release. It’s been amazing to watch the perseverance of Harris and his crew dedicated to making this film happen. Through A Lens Darkly is a film that belongs on the required viewing list of every photography history curriculum within academia or at least on this “Big List of Documentaries About Photography” on reddit.

Are you a photographer looking for feedback on your work? Come and join our  critique group hosted very month on Zoom. UPDATED: October 13, … END_OF_DOCUMENT_TOKEN_TO_BE_REPLACED

As part of the FotoFest 2010 Biennial, Priya Kambli will present her solo exhibition, Colors Fall Down at The H Gallery in Houston, TX. Priya … END_OF_DOCUMENT_TOKEN_TO_BE_REPLACED

I got nothing but LOVE for this talented, brave and pioneering young woman. Why is it that the U.S. media and the Hollywood Hate Machine insists on … END_OF_DOCUMENT_TOKEN_TO_BE_REPLACED

I HIGHLY RECOMMEND you go see... Lorna Simspon on view now thru May 6, 2007 at The Whitney Museum of American Art.Here's a description of the exhibit … END_OF_DOCUMENT_TOKEN_TO_BE_REPLACED

The Path of Conflict Through Afghanistan and Iraq Award-winning images of the conflict-filled path that has come to define U.S. national policy … END_OF_DOCUMENT_TOKEN_TO_BE_REPLACED

"Weems explores issues from both sides of camera" By Vanessa E. Jones … END_OF_DOCUMENT_TOKEN_TO_BE_REPLACED

Here's a story and photography book that explores the search for identity. Many of us and those before us have experienced identity lost because of … END_OF_DOCUMENT_TOKEN_TO_BE_REPLACED

Book description from the website: "While working on the book Moksha, Sheikh went to Vrindavan, one of India’s holy cities, where Hindu widows come to … END_OF_DOCUMENT_TOKEN_TO_BE_REPLACED

Excerpt from article by Reed Johnson, Los Angeles Times Staff Writer:"TO all the people who think that the illegal immigration debate is about … END_OF_DOCUMENT_TOKEN_TO_BE_REPLACED