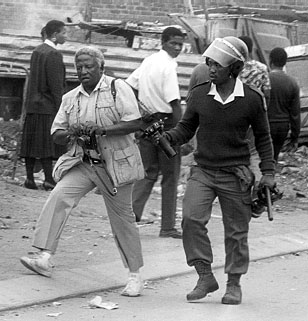 Surely the 2010 FIFA World Cup will be one of the most photographed events this year. All eyes are on the games’ host country: South Africa. Yet do you know of the country’s role in photography history?

During the 1980s, photography became a weapon against apartheid. This creative form of activism was coined “struggle photography” and was influenced by the 1960’s documentary photography of Ernest Cole in later published as House of Bondage (1967) and reportage of the 1976 Soweto Uprising by Sam Nzima. 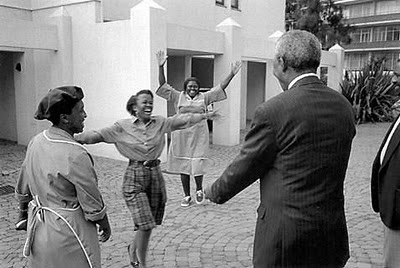 George Hallett
In 1995, Hallett was awarded the Golden Eye Award from the World Press Photo in Amsterdam for a series of photographs of Nelson Mandela taken during the 1994 elections. He had been commissioned by the ANC to photographically document their coming to power. 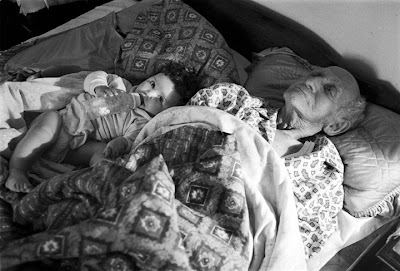 Cedric Nunn
Co-founder of the Afrapix Collective which later became an agency, Nunn’s most personal work is “Blood Relatives” – a series in which he used his extended family to explore his identity as a South African of mixed heritage during the height of the struggle against apartheid in the 1980’s.

Several photographers (many from mixed and immigrant families) featured in the “Then & Now” exhibit emerged from the Afrapix Agency.

Zwelethu Mthethwa attended the whites-only school of fine art at the University of Cape Town under special ministerial consent. He then went on to pursue his Masters as a Fulbright scholar at RIT. His (mostly portrait) work seeks to capture with dignity the life of South Africans in the post-apartheid era.

This year, Aperture published a self-titled monograph of his work to date. Watch a 4-part series interview with Zwelethu Mthethwa by the curator and dean of academic affairs of San Francisco Art Institute, Okwui Enwezor. Also check this video of Mthethwa in his studio.

South African Photographers Interviewed on Dodge & Burn
I’ve had the priveledge to interview two young South African men. Both were deprived of artistic educations under the later years of apartheid but despite that are continuing the photographic legacy of their predecessors.

“When I was schooling we had no introduction to a lot of artistic mediums. Apartheid kept a lot from us, so not having any form of introduction to various outlets I had to search for that myself.”
Read the full interview with Rushay Booysen.

“The colour of my skin as a black South African was a slight set back simply because I was not culturally enriched in the arts at a young age. I had to live in London to achieve the knowledge and enthusiasm.” Read the full interview with Neil John Smith.

Did I miss any photographers?
I’m sure I did, so leave your comments below and share!

STAY IN TOUCH
Get updates on new photographer interviews plus news on contests, art shows and informed commentary on what’s happening with diversity in photography. Subscribe to Dodge & Burn Photography Blog: Diversity in Photography by Email

Are you a photographer looking for feedback on your work? Come and join our  critique group hosted very month on Zoom. UPDATED: October 13, … END_OF_DOCUMENT_TOKEN_TO_BE_REPLACED

Grand Valley State University1 Campus Dr.Allendale, MI 49401-9403The Department of Classics and the Office of Multicultural Affairs and African … END_OF_DOCUMENT_TOKEN_TO_BE_REPLACED

Established in 2003, the McKenna Museum of African American Art, 2003 Carondelet St. (corner of St. Andrew Street), has not been open to the public … END_OF_DOCUMENT_TOKEN_TO_BE_REPLACED

Through portraits in her work titled "[sur]passing", Lola Flash (love the name!) explores how Black folks around the (modern) world experience what … END_OF_DOCUMENT_TOKEN_TO_BE_REPLACED

Galembo has worked for over twenty years photographing the rituals and religious culture in Nigeria, Brazil, Cuba, Jamaica and Haiti, as well as the … END_OF_DOCUMENT_TOKEN_TO_BE_REPLACED

by Bill Graham Excerpt:"A boy in fine knickers and women in ankle-length dresses tell of a time long gone.But the compelling eyes and the faces are … END_OF_DOCUMENT_TOKEN_TO_BE_REPLACED

Cover for Only Skin Deep, edited by Coco Fusco and Brian WallisThis is my first Summer off since graduating college 13 years ago! It's been nice … END_OF_DOCUMENT_TOKEN_TO_BE_REPLACED

NEWSWEEK Article You Should Read: Why Money DOESN’T Buy Happiness

This has NOTHING to do with photography but surely we've all contemplated the question: does having money guarantee happiness? Having been raised … END_OF_DOCUMENT_TOKEN_TO_BE_REPLACED

From the Chattanoogan.com:Duane King, author of The Cherokee Trail of Tears, will speak at the Hunter Museum on Wednesday at 5:30 p.m.The Cherokee … END_OF_DOCUMENT_TOKEN_TO_BE_REPLACED

Semi off topic for this photo-focused blog, I know, but this article ("It's a Man's World: The Politics of Black Masculinity" by Lavelle Porter) is so … END_OF_DOCUMENT_TOKEN_TO_BE_REPLACED

A few weeks ago I was approached by photographer Tom Griggs, founder of fototazo - a site that combines social giving and photography. Tom asked if I … END_OF_DOCUMENT_TOKEN_TO_BE_REPLACED