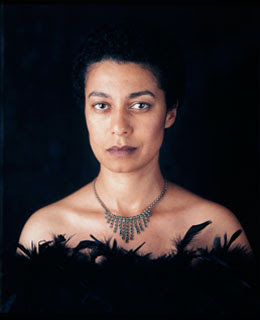 During a visit to London this month, in between catching up with my new family in-law and sightseeing, I was able to see a few photography exhibits. Here are some of the most memorable:

Pass the marble busts of British, French and Roman aristocracy I was pleasantly surprised to find the V&A museum’s photography collection featuring prints by:

Philip-Lorca diCorcia
A portrait from his well-known series, “Hollywood 1990 – 1992” during which the photographer used NEA grant money to pay prostitutes, hustlers, drifters and others hanging in the streets of Los Angeles, CA to let him take their respective pictures.

To distinguish his subjects from their environment and other people in it, diCorcia would often illuminate them by placing lights on the ground. The theatrical impact of his signature lighting is strongest felt when standing close up to one of these vivid prints.

Maud Sulter
Larger than life was Maud Sulter‘s portrait of performance artist Delta Street as Terpsichore from the series “Zabat”. Sulter (pictured in this post) is a self-described “black-woman artist” of Scottish and Ghanaian descent. This quote from Sulter struck a chord within my heart as it relates to what I try to do with Dodge & Burn:

“This whole notion of the disappeared, I think, is something that runs through my work. I’m very interested in absence and presence in the way that particularly black women’s experience and black women’s contribution to culture is so often erased and marginalised.”

Wang Quingsong
A panoramic color photograph titled the “Night Revelers of Lao Li” depicts a 21st century recreation of a Chinese traditional painting from the post-Tang dynasty. Typically reserved for landscapes, I was fascinated by Quingsong’s use of the panoramic format as a form of visual storytelling.

Shadi Ghadirian
Iranian photographer Shadi Ghadrian’s black and white print from the series “Qajar” depicts a woman dressed in 19th-century Qajar style holding a Pespi-cola can. It takes a while to notice the can, which I think is the beauty of this perfectly stylized studio portrait.

Robert Frank
Out of the 28,000 images Frank shot during his 1955 road trip across the USA, only 83 were selected for publish in Frank’s most notable work “The Americans”. During this small exhibit at the Tate Modern, you actually see Frank’s contact sheets (remember them from the pre-digital days?).

These contact sheets show his subject’s environment, the events and give context to the iconic images that are so often a part of a photography student’s introduction to documentary work. Ironically, the contact sheets reveal more and even lessen the shock originally felt from these gritty images of urban and rural life in 1950’s America.

SUBSCRIBE via Email
Get updates on new photographer interviews plus news on contests, art shows and informed commentary on what’s happening with diversity in photography. Subscribe to Dodge & Burn Photography Blog: Diversity in Photography by Email

Are you a photographer looking for feedback on your work? Come and join our  critique group hosted very month on Zoom. UPDATED: October 13, … END_OF_DOCUMENT_TOKEN_TO_BE_REPLACED

By Felicia Cousart Matlosz / The Fresno BeeFor all his fame as a writer, William Saroyan also cut a compelling figure on film. In photographs, to be … END_OF_DOCUMENT_TOKEN_TO_BE_REPLACED

As part of the FotoFest 2010 Biennial, Priya Kambli will present her solo exhibition, Colors Fall Down at The H Gallery in Houston, TX. Priya … END_OF_DOCUMENT_TOKEN_TO_BE_REPLACED

A few weeks ago I was approached by photographer Tom Griggs, founder of fototazo - a site that combines social giving and photography. Tom asked if I … END_OF_DOCUMENT_TOKEN_TO_BE_REPLACED

Gallery Owner Arnika DawkinsD&B: What inspired you to open a fine art photography gallery? AD: After obtaining my Master of Arts at the Savannah … END_OF_DOCUMENT_TOKEN_TO_BE_REPLACED

Prentice Herman "P.H." Polk (1898-1985) is not a name you'd hear in a typical Photo History class or lecture but I consider him to be a photography … END_OF_DOCUMENT_TOKEN_TO_BE_REPLACED

Highlihgts some really poignant photojournalism by both emerging and established photographers. The series by freelance photographer Stephanie … END_OF_DOCUMENT_TOKEN_TO_BE_REPLACED

17 May - 14 June 2008Now in it's 18th year, the Hereford Photography Festival is the UK's longest running annual celebration of the photographic … END_OF_DOCUMENT_TOKEN_TO_BE_REPLACED

I love doing this blog because I learn just as much as I hope to teach others. From the aresponsibilityforspreadinghappiness blog: "According to one … END_OF_DOCUMENT_TOKEN_TO_BE_REPLACED

Charts the history of Japanese photography from 1945 to the present day, bringing together a vast collection of images from a number of established … END_OF_DOCUMENT_TOKEN_TO_BE_REPLACED