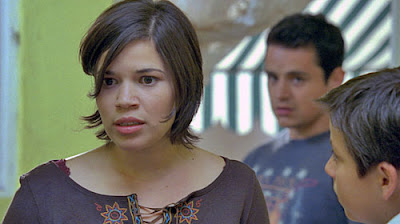 “TO all the people who think that the illegal immigration debate is about electronic fences, NAFTA, Lou Dobbs and such, director Patricia Riggen and screenwriter Ligiah Villalobos offer a polite but emphatic rebuttal.

That, Riggen says, was the insight she uncovered while leafing through Villalobos’ screenplay for “Under the Same Moon” (La Misma Luna), a Spanish-language drama about a Mexican mother who comes to work in Los Angeles, leaving behind her young son across the border.

The U.S.-Mexican production, which will open on more than 200 screens in Los Angeles and other cities on Wednesday, is the first Latino-centered movie that Fox Searchlight has distributed, reflecting the major studios’ interest in tapping into a rapidly growing market. It stars Kate del Castillo as the mother, Rosario; Adrian Alonso as her son, Carlitos; and an eclectic supporting cast that includes America Ferrera of “Ugly Betty” as a child smuggler and the norteño supergroup Los Tigres del Norte as themselves.”

Are you a photographer looking for feedback on your work? Come and join our  critique group hosted very month on Zoom. UPDATED: October 13, … END_OF_DOCUMENT_TOKEN_TO_BE_REPLACED

Afrology opens on Friday, February 22nd, 2008, 6pm-Midnight. The exhibit debuts seventeen variations of the 1970’s hairstyle, the “Afro”, that … END_OF_DOCUMENT_TOKEN_TO_BE_REPLACED

Some heads might roll at Vogue :) Excerpt from WWD.com's coverage:"...a spokesman for Vogue said: "The Shape Issue celebrates athleticism from start … END_OF_DOCUMENT_TOKEN_TO_BE_REPLACED

Her work is controversial, yet I LOVE the simplicity of her notorious use of the silhouette and the powerful subtlety of her message(s). Walker's … END_OF_DOCUMENT_TOKEN_TO_BE_REPLACED

On Friday, September 14th after work I headed on down to the Chelsea Barnes & Noble for an artist meet & greet/book launch of The Moving Images of … END_OF_DOCUMENT_TOKEN_TO_BE_REPLACED

Semi off topic for this photo-focused blog, I know, but this article ("It's a Man's World: The Politics of Black Masculinity" by Lavelle Porter) is so … END_OF_DOCUMENT_TOKEN_TO_BE_REPLACED

The Photography.Book.Now International Juried Competition is an international juried self-published book competition, and a celebration of the most … END_OF_DOCUMENT_TOKEN_TO_BE_REPLACED