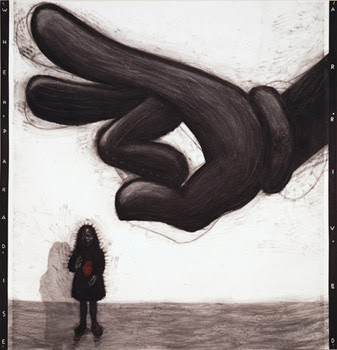 Non-photo based artwork but relevant to the subject of DODGE & BURN… I just LOVE the image of a giant Mickey Mouse hand flicking the little girl. Both the visual impact and suggested meaning are HUGE!

Chagoya’s subject matter reflects his own personal history and interests: Mexico’s complex past, international politics, various religions, art history, and popular culture. He draws on all of these sources, combining cultural symbols to create scenes of hybrid worlds and scathing—and often humorous—political and social satire. According to the artist, “Humankind is in constant war with itself, perfectly capable of total destruction. This is the raw material for my art.”

Chagoya borrows from the canon of Western art, adapting works by Francisco Goya and Philip Guston (satirizing, respectively, Napoleon’s invasion of Spain and the Nixon administration) to contemporary political contexts (the Reagan and current administrations).

Chagoya’s work also places icons from the dominant Western culture within Indigenous or colonial settings, so that Superman faces off with an Aztec god, or cannibals run amok in Monet’s gardens at Giverny. Chagoya has described this world of intermingled influences as a place where “all cultures meet and mix in the richest ways, creating the most fertile ground for the arts ever imagined.”

Born in Mexico City in 1953, Chagoya regularly visited the museums of the capital city and Teotihuacán as a child. These cultural institutions provided him with his first exposure to pre-Columbian culture. He moved to the United States in 1979 and in 1984 he enrolled at the San Francisco Art Institute, where he created the powerful work that begins this mid-career survey exhibition. In 1986 he completed an MA, and in 1987 an MFA, at the University of California, Berkeley. Chagoya has taught printmaking at Stanford University since 1995. His work is included in the collections of many major museums, including the Library of Congress Print Collection and the National Museum of American Art, Washington DC; Los Angeles County Museum of Art; San Francisco Museum of Modern Art; Centro Cultural de Arte Contemporáneo, Mexico City, Mexico; Whitney Museum of American Art; and the Museum of Modern Art, New York; Philadelphia Museum of Art, Philadelphia; The Art Institute of Chicago; a nd the Metropolitan Museum of Art, New York.

Public Programs
Enrique Chagoya: Borderlandia will include a wide array of public programs that highlight the ways in which Chagoya’s art engages with a diverse range of disciplines. The programs include an artist’s lecture by Chagoya, an interdisciplinary panel on border issues, and a reading and discussion between Chagoya and writer Victor Martinez.

Credit line
Enrique Chagoya: Borderlandia is organized by the Des Moines Art Center. The exhibition is sponsored by the Lannan Foundation and Principal Financial Group Foundation, Inc.; additional support is provided by The Jacqueline & Myron Blank Exhibition Fund. Support for the catalog has been provided by George Adams Gallery, Gallery Paule Anglim, and Stanford University. This exhibition is curated by Patricia Hickson, Des Moines Art Center curator and downtown gallery manager. The presentation at BAM/PFA is coordinated by Lucinda Barnes, chief curator and director of programs and collections.

Gallery Hours:
Wednesday to Sunday, 11 to 5.
Closed Monday and Tuesday.

Are you a photographer looking for feedback on your work? Come and join our  critique group hosted very month on Zoom. UPDATED: October 13, … END_OF_DOCUMENT_TOKEN_TO_BE_REPLACED

By TERRY KINNEY Associated Press WriterA rare daguerreotype of abolitionist John Brown was bought by an unidentified bidder by telephone for $97,750 … END_OF_DOCUMENT_TOKEN_TO_BE_REPLACED

Kamoinge (means "a group of people working together" in Kikuya, an East African language) was formed in New York in 1963 to address the … END_OF_DOCUMENT_TOKEN_TO_BE_REPLACED

Great posting from the "We Need to Stop" blog on this photo for sale on eBay.Read it here. … END_OF_DOCUMENT_TOKEN_TO_BE_REPLACED

Through portraits in her work titled "[sur]passing", Lola Flash (love the name!) explores how Black folks around the (modern) world experience what … END_OF_DOCUMENT_TOKEN_TO_BE_REPLACED

By Julia TanskiSome good commentary and links to galleries in here... read it. … END_OF_DOCUMENT_TOKEN_TO_BE_REPLACED

By Sanjay M Johri for merinews It is around 11 a.m. Be it the busy court areas, Municipal Corporation, Housing Board or the office of the Lucknow … END_OF_DOCUMENT_TOKEN_TO_BE_REPLACED

One of my many missions right now is to compile a list of photo books by African-American photographers. Honestly, I'm finding this mission to be … END_OF_DOCUMENT_TOKEN_TO_BE_REPLACED

New Power Generation 2008, organized by the Hampton University Museum, is a national competition for contemporary art by people of African descent. It … END_OF_DOCUMENT_TOKEN_TO_BE_REPLACED

As part of the FotoFest 2010 Biennial, Priya Kambli will present her solo exhibition, Colors Fall Down at The H Gallery in Houston, TX. Priya … END_OF_DOCUMENT_TOKEN_TO_BE_REPLACED