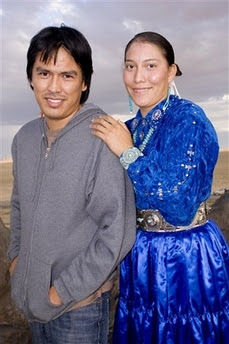 Blonde hair, blue eyes, Barbie doll-like proportions, strutting your stuff in a barely-there swimsuit: none of these will qualify a woman to win the Miss Navajo Nation beauty pageant!

Excerpt from the Associated Press article titled “There she is, Miss Navajo” by Felicia Fonseca:

“On the nation’s largest Indian reservation, where tradition reigns, contestants are required to speak their native language, make fry bread and butcher a sheep, the animal that represents life to the Navajos.

“The pageant really gets people’s interest because they say, ‘Oh my gosh, a pageant where you butcher sheep,'” said Billy Luther, a documentary film maker. “But I think people walk away learning the Navajo way of life and how much the Navajo people respect women.”

Luther, whose mother was crowned Miss Navajo in 1966, offers a different take on what it means to be beautiful in his first feature-length documentary, “Miss Navajo,” which premiered at the Sundance Film Festival earlier this year is airing on PBS’s Independent Lens.

Beauty is very much internal, Luther says. What Navajos perceive as beautiful might not be beautiful to others, he said.

“It’s having the knowledge of your culture, it’s having respect for your mothers and grandmothers, it’s the language, fluency. As we say, that’s harmony, that’s what we strive for,” said Luther, 32, who is Navajo, Laguna and Hopi.

Luther’s documentary follows Crystal Frazier, a now-23-year-old Table Mesa resident, on her quest to become Miss Navajo during the 2005 pageant.”

Get more info at the film’s website – missnavajomovie.com and watch the film airing this month on a PBS channel near you.

Are you a photographer looking for feedback on your work? Come and join our  critique group hosted very month on Zoom. UPDATED: October 13, … END_OF_DOCUMENT_TOKEN_TO_BE_REPLACED

As part of the FotoFest 2010 Biennial, Priya Kambli will present her solo exhibition, Colors Fall Down at The H Gallery in Houston, TX. Priya … END_OF_DOCUMENT_TOKEN_TO_BE_REPLACED

Held over 4 days during the summer in Gallup, New Mexico, every year this ceremonial features: dances, a Queen contest, all-Indian invitational rodeo, … END_OF_DOCUMENT_TOKEN_TO_BE_REPLACED

April 6, 2008–September 1, 2008 | Art of the AmericasPhantom Sightings: Art after the Chicano Movement is the largest exhibition of cutting-edge … END_OF_DOCUMENT_TOKEN_TO_BE_REPLACED

Excerpt from book review by Kam Williams: Jerry Taliaferro, the author, says in the preface of his new book, "Women of a New Tribe: A Photographic … END_OF_DOCUMENT_TOKEN_TO_BE_REPLACED

Emerging photographers and photo-based artists based in New York City or the tri-state area should not miss this event. A 2-hour seminar led by one of … END_OF_DOCUMENT_TOKEN_TO_BE_REPLACED

The CocoaChic Beauty site covered this important dialogue on "women, race & beauty" that took place on November 27, 2007. The discussion was moderated … END_OF_DOCUMENT_TOKEN_TO_BE_REPLACED

Established in 2003, the McKenna Museum of African American Art, 2003 Carondelet St. (corner of St. Andrew Street), has not been open to the public … END_OF_DOCUMENT_TOKEN_TO_BE_REPLACED

Artist Bio: Calvin Littlejohn (1909-1993) was born in Arkansas but moved to Fort Worth, Texas, in the 1930s and established his commercial photography … END_OF_DOCUMENT_TOKEN_TO_BE_REPLACED

Artist statement from the WMU Photography blog:"This project began with my daughter. My seven-year-old daughter loves pink. She wants to wear only … END_OF_DOCUMENT_TOKEN_TO_BE_REPLACED