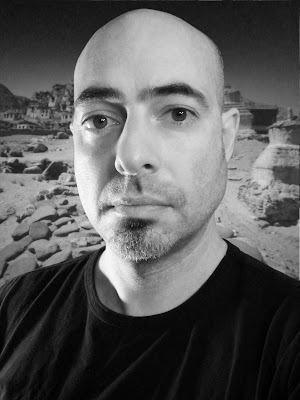 D&B: Where are you from?
NC: That’s a long story. I was born in England, but my parents moved to Canada, briefly, and then the United States when I was an infant. I’ve lived in Seattle, Southern California, Virginia, Detroit area, Northern Michigan, and recently Dubai.

Now I live in Syracuse, New York. I’ve also spent quite a bit of time traveling in India and other countries. I’ve done enough moving around that no place really feels like “home” to me.

D&B: How did you get started in photography – any “formal” training?
I’ve had an affinity for “framing” things as long as I remember, in order to notice and understand the world around me.

I first started doing this with a camera as a small child when a relative sent me some sort of young adventurer spy type kit as a present in the mail. It came with a plastic 120 roll film camera that took awful, blurry pictures.

I ran off with my mother’s camera whenever I could, and then my dad’s old Agfa twin lens 35mm went with me on a school camping trip when I was around 13. I’ve been shooting constantly ever since.

D&B: What cameras or techniques do you use?
NC: All of them. It depends on what I’m working on.

D&B: Who are your mentors (in photography)?
NC: Well there are the mentors I knew in person, like Paul Berger at the UW, but perhaps more influential are the works of the masters, most of whom I’ve never met. I have a pretty encyclopedic taste in image makers, and try to learn what I can from everyone, so it’s pretty hard to put a finger on anyone who has been more influential than others.

My style of shooting tends to the social documentary/street genres, but then veers all the way to composite & photo montages, so I’m kind of all over the place. Some of the more direct influences are Henri Cartier Bresson, Alex Webb, Ragibur Singh, Raghu Rau, Robert Frank and Gary Winnogrand.

Of course these guys were all classic straight “street photographers” who would probably look rather darkly upon my practice of photo montage. For that I have to look back to the group of German Dadaists like Hannah Hoch, John Heartfield, and Raul Hausmann, others who were probably inspired by them like Martha Rosler and Robert Heineken, as well as more contemporary digital montage artists like Plonk & Replonk, Pedro Meyer & Martina Lopez.

I suppose I shouldn’t forget Man Ray, Jerry Uelsmann, and even a strange guy named Sean Hillen, who still insists on doing his thing with scissors and glue. But this is a game I could play all day, and if you ask me tomorrow I might come up with an entirely different list.

D&B: Have you experienced any setbacks or different treatment along your photography career that you would attribute to being a photographer of color? (this question is optional)
NC: This is, of course, a bit of a loaded question. I have to honestly say that it hasn’t been a problem in my career as a photographer, and in fact, has often worked to my benefit. I should preface this, however, by saying that my appearance is of that recently hip category that might be labeled as “ethnically ambiguous”, so nobody really knows quite where to place me.

Growing up in the ’80s in a variety of homogeneous White suburbs, however, this wasn’t so hip, and I was often singled out in a negative way because of my differentness. I’m actually of mixed race. My mother is English (White) and my father Indian.

This mixed heritage has often left me feeling out of place but I think that often had as much to do with my always being the “new kid” on the block due to my family’s frequent moves as I was growing up as it did any sort of ethnic difference.

Later in life though, I think this feeling of being an outsider has enabled me to fit in with pretty much any group of people, because it forced me to learn to be adaptable and observant of my surroundings, and I think that feeling really led directly to my interest in photography. Watching people, observing, became my way of learning and interacting, and it became not only a habit, but a career.

D&B: When did you realize you could make a living at photography? Describe your journey towards becoming a pro.
NC: The question makes it sound as if there is some sort of linear progression to becoming a pro, but my journey has been anything but. For a long time I had to make a living doing all sorts of disagreeable menial jobs, while trying to keep my art and photography alive on the side.

Right now, although I’m exhibiting my work in galleries, etc. I’m actually making my living by teaching photography, which is a bit different than making a living as a photographer. I have done that, too, however, for six years as an industrial & commercial photographer in the Detroit area, mostly for Ford Motor Company.

I made a good living at that, but I really wanted to work on my own art in such a way that I didn’t have to worry about selling it. Teaching gives me the freedom to do that, as well as a way to give back to the community and connect to something larger than myself.

D&B: What do you hope to achieve with your photography?
NC: A lot of the work I do is for myself. It’s a way to reconnect to and teach myself about an Indian heritage that I never felt a part of when I was growing up. But I also hope that my images can give others a view of worlds and people they would never have otherwise met.

I don’t shoot in India exclusively. For me photography has this amazing ability to bridge all kinds of different cultures, people, and places. It’s a tool for learning, as well as a way to give the imagination free reign.

D&B: What’s your dream photography project?
NC: Well what I’m currently working on is a long term project called “Waking from Dreams of India“. I chose this title because for many years I only dreamed of the exotic, faraway place where my father came from.

When I actually went there, I found it was a bit different from the dream, and the photographs took on the character of both my fantasy and the reality of the place that I am still getting to know. This is my dream project but I’m trying to get it into more of a reality phase than a dream.

D&B: What are you shooting now?
NC: Right now I am not really in a shooting phase. I’m digging my way through thousands of images I’ve shot over the past several years, trying to make sense of my travels and discoveries. For me, photography is funny that way.

You go through periods of intense seeing, shooting, action, out there in the world, and then intense periods of introspection, editing, and in my case, montaging, where all those impressions get mixed up like the little bits in a kaleidoscope.

For me it’s analogous to the way my memory works, and I’m never sure how things will look when they come out the other side.

Are you a photographer looking for feedback on your work? Come and join our  critique group hosted very month on Zoom. UPDATED: October 13, … END_OF_DOCUMENT_TOKEN_TO_BE_REPLACED

Here's a story and photography book that explores the search for identity. Many of us and those before us have experienced identity lost because of … END_OF_DOCUMENT_TOKEN_TO_BE_REPLACED

Produced by the National Film Board of Canada, 1967These films reveal the live reality of traditional Eskimo life before the European … END_OF_DOCUMENT_TOKEN_TO_BE_REPLACED

Her work is controversial, yet I LOVE the simplicity of her notorious use of the silhouette and the powerful subtlety of her message(s). Walker's … END_OF_DOCUMENT_TOKEN_TO_BE_REPLACED

We've all heard about iconic Black photographers like Gordon Parks and James VanDerZee, but today I found out about the "founder of African-American … END_OF_DOCUMENT_TOKEN_TO_BE_REPLACED

Through portraits in her work titled "[sur]passing", Lola Flash (love the name!) explores how Black folks around the (modern) world experience what … END_OF_DOCUMENT_TOKEN_TO_BE_REPLACED

Joshua L. Miller, assistant professor of English language and literature at the University of Michigan, Ann Arbor, will present a lecture entitled … END_OF_DOCUMENT_TOKEN_TO_BE_REPLACED

by Regan McMahon, Chronicle Deputy Book EditorMine Eyes Have SeenBearing Witness to the Struggle for Civil RightsPhotographs by Bob Adelman; essays by … END_OF_DOCUMENT_TOKEN_TO_BE_REPLACED